The Mock The Week regular will tour the show from October 2019 to March 2020, following a run at August's Edinburgh Fringe.

Talking about the premise, his promoters explain: "In early 2019, Rhys was asked to go back to his school and inspire the Year 11s. Given that Year 11s are a nightmare and there was no fee, he ghosted the teacher who had emailed, but when you think back to yourself at that age it's impossible not to wonder: was the past even good? Then again, is the present?

"While so many people are concerned about 'cancel culture' and rallying against political correctness, Rhys thinks we aren't cancelling enough. Specifically, the hundreds of murder podcasts that pretty much explain how to get away with killing someone. In lieu of them being banned, it's time to figure out why we're so fascinated by murder, and why so many more women listen to the true crime genre than men."

Snitch will be the fifth solo show from Rhys James. His previous show, 2016's Forgives, appeared in British Comedy Guide's list of Best Reviewed Shows of the Fringe.

Alongside the tour, this Autumn James will following up his BBC Radio 4 series Rhys James Is... with a new series, Polars.

A full list of tour dates for Snitch are below. Tickets via rhysjames.co.uk 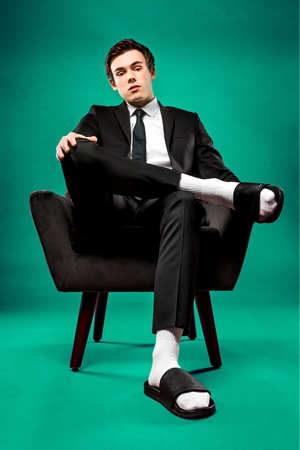