How did you first get into performing comedy?

I used to write jokes for radio presenters when I was at university. It was more fun than bar work to pay my way but after a while I started to get miffed when I'd written something I thought was a pretty good gag, I would listen to the shows and hear them mangle up the delivery. I realised you can't be critical of someone's work unless you are willing to do it yourself. That led to me finding all the open mic spots I could to learn stand-up and to me getting into presenting radio.

Would it be fair to say that your appearances on The Mash Report have boosted your comedy profile in the last couple of years?

I have been so lucky with The Mash Report. Being on this kind of show had been my dream since watching things like Have I Got News For You as a teen. It's not just the TV side of it, the clips from the show have a life of their own. I know people who didn't know what The Mash Report was but they forwarded Facebook posts to me to ask if that was my face.

How much fun is it to record The Mash Report? We presume it is fun, but you've got to try and avoid smiling in your newsreader role?

I know I would say this even if it's not true (I want to be asked back after all) but it really is the most fun I've had in any job. We have a live audience so the recording is very different to what gets broadcast. While we're waiting to hear what pick-ups are needed we get to mess around with the crowd. It's like the best gig. And as for not smiling, the key is to rehearse the material loads. You find things less funny on the 17th read.

Fans of that show might not be aware that you also present a great topical show on BBC Kent...

I have always had a radio part of my career and I hope that doesn't change. It's a great medium for me. A lot of the show is made up from sketches where I do comedy bits about a news story and also play the fake correspondents, interview guests and other characters. It's perfect for an introvert like me. I make the whole thing in my home studio so I can still churn out episodes even after the nuclear winter or whatever awaits us. 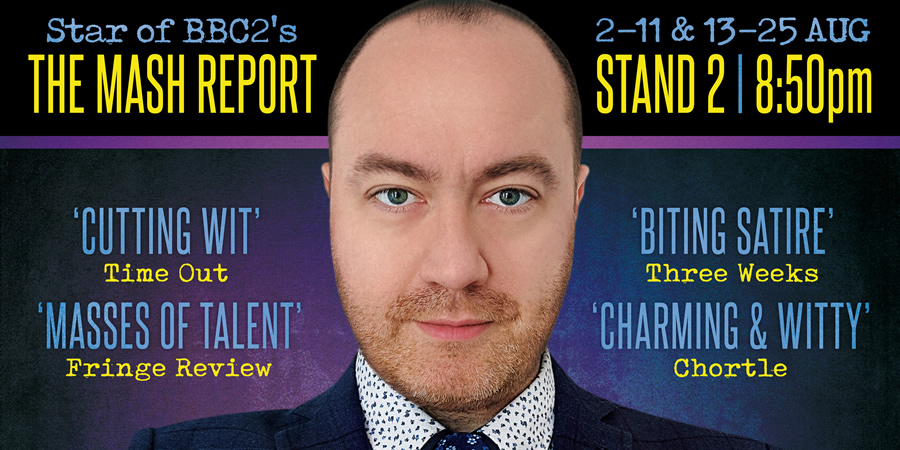 Tell us about your 2019 Edinburgh show. What's the premise?

It's called Better Than and it has a really simple idea. I think we all know the right thing to do and yet we are getting very skilled in finding a reason to not do it. We know we shouldn't be selfish and unkind but if we can convince ourselves that we're been wronged, we're the victim, or someone else will do it if we don't. We talk ourselves into doing the worse action. I want people to aim to be better than the worst kind of person. It's a really small aim but that's all it takes.

If someone gave you a button that would delete Twitter, would you press it? You probably should to save us all from Donald Trump, for starters!?

I really couldn't. Sadly I owe it the second wind of my career. A while back I wasn't getting much stand-up work; the commercial radio stations I'd been working for restructured; and I was basically out of work. I spent my days making a podcast and tweeting about it and my evenings live tweeting comments about TV shows. That led to getting back into radio. The show I do now is basically the podcast I did with a nicer budget. So while Twitter is a place for people to send death threats to people who disagree with them about a dull trade deal it's also the reason I didn't have to quit.

Can you help improve us? We want to be better in regards to what we eat and drink at this year's festival. Any tips?

The most practical advice I could give is to swap some of the pints you will have at 5am for gins. You'll still get wasted but you'll have slightly fewer calories in the process. At this stage I don't even know what kind of Edinburgh I'll have. Some years you hit the ground running and get such good focus. Other years the call of the beer is too great. But if I do take the lower moral route and end up tweeting pictures of my antics at least you'll know some of the fuel for that debauchery will be low calories gin.