How long have you been performing at the Fringe now? What was your first year like?

My first official "performance" at the Fringe was in 1991 when I was 17 with a college theatre group. I went and saw Rob Newman doing a solo show: he was so exciting and inspiring. Little did we know the magnitude of the impact he was gonna have on comedy in the 1990s and that he was at the edge of his soon-to-be rock 'n' roll explosion 1990s comedy career with David Baddiel. But my first festival as a comedian was not until 2009, with my first hour show called the Sticky Bivouac. It was fun, I new no-one, lost £3.5 grand and that was the first of many lessons I was to learn for the next decade - and I'm still learning. We never stop learning. If you think you've worked it out, you're a cunt.

For those uninitiated, how would you describe your style of comedy?

Like a black horse standing with each hoof in a separate golden paddling pool filled with rum, fur, concrete and mist.

Last year you won a Comedian's Choice Award. It must be nice to be recognised by your peers?

Yeah I guess.. but I don't really dig for votes and prizes and I hate competitiveness.. it's all relative. It's nice to get a prize but there were so many better shows in Edinburgh last year. I don't think it's healthy to compare art like that. It really is all down to individual taste. I know plenty people who hated or just thought my show was boring... lol. It's all subjective. Plus we're all gonna die ... so it means nothing in the end, lol. I'm just trying my best to make a room full of strangers laugh like the hundreds and thousands of other comedy artists clinging onto the back of this cultural juggernaut.

From our perspective, it seems your profile at the Fringe has grown over the last few years. Have you noticed that yourself? Bigger audiences?

Yeah bigger audiences is amazing to see. After just 2 people to maybe 25 in 2009 to now full rooms of 130 people every single night. I sold out every night last year! That's just crazy to me!! But I hope it gives other new comedians faith and inspiration to keep going.

You always seem to be out flyering?! Now you're always packing out your venue - a lot of it on word-of-mouth we think. Do you necessarily need to be wheeling around that trolley so much this year?

Yes I'll be out flyering as ever. I'm self-contained: no manager, no agent and no flyer team. I fully believe if you wanna get and build an audience at an arts market like Edinburgh you gotta let the consumer/audience member taste and sample the product and what better way than getting out and letting them meet you, you the performer, that you're asking them to watch for 60min in a dark room.. I'm literally asking them to look at me on the street and chat briefly and let them judge do they wanna come look at me on a stage, and pay for that. It seems to work in most cases but at least you're being honest and giving THEM the option. And I'm honest with public as well, if I meet someone in the street I don't click with I'll tell them I don't want them to come see me, cause I know my audience and I know they'll not enjoy it. However this seems like clever reverse psychology and they sometimes turn up. And yes, they don't enjoy it. But sometimes, I'm wrong and they do, and they say thank you.. and it's healthy to admit when you're wrong on your assumption of people. But generally you just don't know, after 10 years of flyering meeting billions of people you can not predict the personality of a stranger on the street. You gotta set your stun guns for humble and empathy when you're trying to lure the street punters into your art. 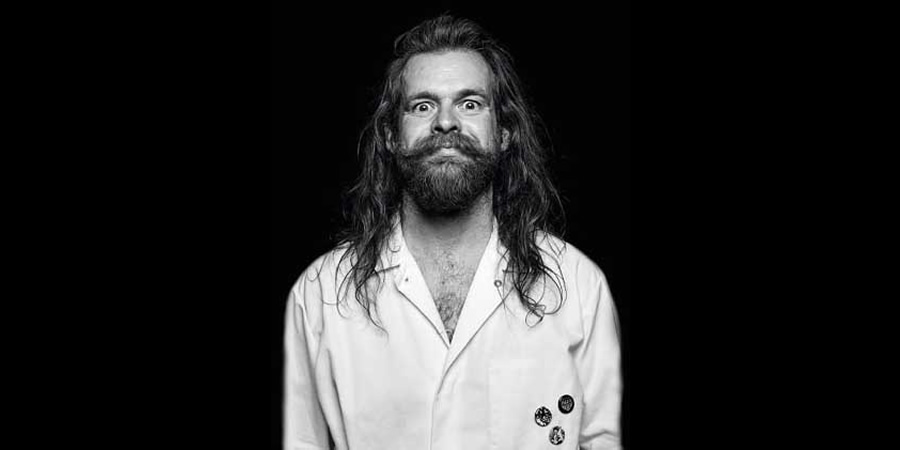 So this year's show is called Trufficle Musk. What's the theme?

It's about my struggle with anxiety and the abuse I went through with a female partner that I cared deeply about. I talk about the growing trend of labelling the actions of certain individuals as "toxic masculinity". I talk about being bullied equally 50/50 in my life by men and woman. And my point is, by labelling the toxicity as "masculine" that is actually counter-intuitive to helping the serious growing global problem of mental health, especially men's mental health because you're basically branding negative connotations to the male gender and not the individuals that are causing this disgusting toxicity and that's an unacceptable prejudice. And it sadly pushes men away from speaking out and seeking help and support about their experiences of being bullied and abused by females (and by men as well), and the reality of female toxicity and female bullying seems to be leading to more depression anxiety and suicides in men because the "man up" trend is ingrained within our backward social brainwashing. And there is so much pressure on men to STILL have a stiff upper lip and literally we are told to "suck it up" ... to suck in your feelings and genuine pain and to not talk about it. And not talking and not communicating clearly is what's causing most of if not all of the issues on this crazy little planet. Humans not communicating properly.

It's a topic that's clearly bugging you right now.

This sweeping lazy gender label is pissing me right off now, just as much as the sickness and passive aggressive nature of organised religion and greedy elitist politics is. Calling it toxic "masculinity" is yet more branding and labelling by humans and it's simply conflict-inducing words that humans do not need. It should be about toxic "humans". It should not be focused on a single gender. YES toxic men exist, I'm not dismissing that, at all! I've been on the receiving of male toxicity growing up in a very rough working class housing estate as a very feminine and curious young man whose first sexual awakenings were with men. And this became known and I was beaten up and bullied and verbally abused, by men, a lot! And all I'm saying is it should definitely be about balance. Equality. Because I've been bullied and abused over my years by women as well. And I have so many female friends agreeing with me that it's good I'm talking about female toxicity because they as women have faced it and seen it first hand. They empathise that it is harder to get support as a man who's faced female domestic abuse. It's about proper equality and positive communication and conflict resolution.

As a man I'm still sickened and still so so utterly baffled, every day, that some humans decided that it made sense at some point in our existence that men get paid more than women. That is fucking totally and utterly unacceptable! And looking after each other and empathising with ALL genders (whatever you see yourself as) and being more aware of ALL bullying and toxicity can only be a positive move forward in evolution. 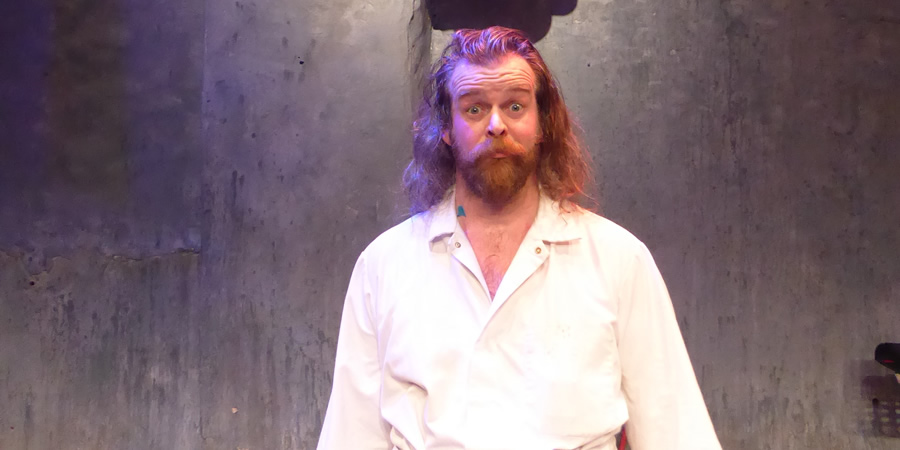 We humans are very much in the crèche of our evolution, we think we're modern and developed and that, again, is fucking absurd. But how would I know this? Well common sense will tell you that at any historical point in any society, in their living history - be it the 4th Century or the 12th Century - that they as a society thought, "look at what we humans have achieved ... these are the greatest achievements ever! Ever! Look at what we've done! We are at the greatest time in the history of humans" and yet we are still saying the shit, except, except one thing still exists that proves all this wrong. War, conflict. Global conflict. We're still bloody fighting and bickering and KILLING each other and over what? Politics, money, land, and gods and ALL - ALL! - of it, we invented. That !!! is the greatest comedy in history. We humans are utterly utterly mental! We ALL deserve a comedy award!

We look forward to seeing how you bring that point to the stage. You won't be losing your normal clowning style though? It'll still be a funny show?!

No way!!! Clowning and making people laugh is and always will be at the fore front of my work. Always. That's what we HAVE to do as artists, put that mirror up to society. And when I say "artist" I mean every human on this planet, that's what we are, what our purpose is, I believe. I believe 100% we are the artists of this planet, just 90% of us have forgotten. Look at us, we are the perfect machine for making art. Look at your amazing hands right now, and how they work.. feel how your brain it's reading these squiggles we call letters that form words that we invented and how it's processing them together in your head as you read all this... and these words I'm typing with my hands on this little phone we invented. The problem is we've become lazy, lazy consumers and not makers and inventors anymore. That I believe is the cause for a lot of the depression and anxiety in the world: cause we're not making anymore, we're consuming other people's art, food and inventions. That's why art therapy actually works for people with mental health problems. It really helps tap into those parts of the brain making us feel better. Just the way comedy does. But that's all a quick hit and you're then £15 or £40 poorer after a 60 minute gig. We should all be creating for ourselves and society and we don't need to profit off that.

So yes, clowning and absurd avant-garde madness will always be in my show because you gotta be brave to stand up and expose the madness of human society back at itself. We clowns/comedians/thunderbird shamen (ancient Native American clowns), what ever you wanna call us, have always released and exposed the tensions of society right back ever since we gained consciousness and crawled laughing from those 100-seater cave venues billions of years ago - and them misquoting jokes the next day at the watering hole.

Talking of shows, you're also reviving your hit 2014/2015 show Release The Baboons, but with a slight tweak to it?

Not that much of a tweak which is a bit worrying, lol. Yes it's for "families" so I'm sure some parents may find it inappropriate for young adults ... but young adults LOVE my madness, it's for 9+ years. I prefer performing to all ages anyway on the street, so this is probably gonna be the most fun I'll have at the Fringe.