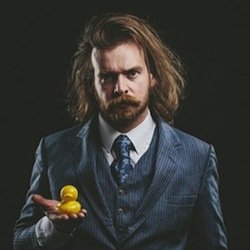 Absurdist, high-energy comedy. Feast your eyes and teeth on the bizarre, unique and delicate world of Paul Currie. A whirlwind of dizzying nonsense. 'Beautifully crafted, committed and exciting silliness' (John Higgins, Culture NI). 'There was something extra original about this guy, it was like watching the Monty Python version of stand-up comedy' ***** (FringeGuru.com). 'Paul Currie mesmerised the audience. Currie makes sadists of us all, as never has watching another's turmoil been such fun' ***** (New Current).

Feast your eyes and teeth on the bizarre, unique and delicate world of Paul Currie, street clown and stand-up comedian.

An Absurdist, high-energy mass of nonsense and silliness, Paul mixes up forms of comedy entertainment and condenses them into 60 minutes of undiluted, sugary, playful joy.

Paul's irreverent style attempts to kick down the back wall of cul-de-sac that alternative comedy has found itself in. Combing his skills in puppetry, street performance and clowning he concocts a mature form of comedy that accepts and acknowledges its own origins - a new, vibrant strain of stand-up.

If alternative comedy was the punk rock of stand-up, this is the New Wave.

And it's a whirlwind of dizzying nonsense.

An integral member of the flourishing Belfast comedy scene, Paul established the trend in Belfast for smaller comedy clubs in 2007 as an alternative to the Empire Comedy Club (which was the ONLY comedy club in Belfast at the time and had been for years) by starting his own night that gave new fresh comedians a chance to perform in a smaller safer environment.

Paul debuted at the Edinburgh Festival Fringe in 1991 and has been performing stand-up since 2004. He secured his first big break in 2011 at the Pleasance for Avalon's Comedy Zone.

His impressive and eclectic performance credentials span twenty years and include an 8-year stint as a A Muppeteer for Jim Henson and Sesame Workshops, "Potto" on Sesame Tree, "Ruairhi" on Big City Park, as well as 13 years as a street performer. He has also trained with some exceptional street clowns, from Avner the Eccentric and Bill Irwin to Frazer Hooper and Joe Dieffenbacher.