Diiiiizzy, his head is spinning - Carl Donnelly is dealing with a novel new experience at the 2019 Edinburgh Fringe: gig-induced dizziness. That's because this year he's performing in the round, in Heroes' absolutely splendid SpiegelYurt.

As the popular Londoner announces at the top of this hugely enjoyable show, he'd seen some stuff in there last year, bloody loved it, and wondered what it would be like as a space for stand-up. Well, it's as marvellously memorable as he hoped, and adds a whole new level to the one-bloke-talking experience. Classic Carl Donnelly, but sometimes from the back.

Yep, this is a side you don't often see of him, and that applies to the material, too. As the title Shall We all Just Kill Ourselves suggests, Donnelly was planning on writing something seriously dark when the Fringe brochure deadline rolled around back in February, but he was having a weird few weeks and things changed.

He's still tackling some big issues here though - the drug section is particularly on-point - and his take often feels more honest and heartfelt than most: it comes from experience.

Right, to the ringmaster.

What exactly was the original idea for this show, back in February?

The original plan was for it to be an hour-long comedy rant about how terrible the modern world is and how we've made it impossible to feel good and worthwhile.

As I explain in the show though, that feeling basically reflected how I felt in the early part of this year. My wife was overseas and two of my best friends had recently moved away so I found myself spending so much time alone ruminating about the state of the world.

When I went down to Australia and was re-united with my wife and spending less time alone, I realised that most of those feelings were elevated because of my isolation. Since then the show has evolved to cover some of my concerns but from a much more clear headed and - luckily for the audiences - funny way! It could have been a tough hour. 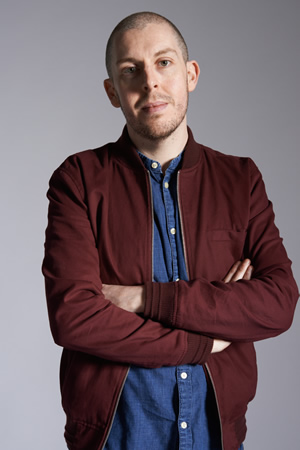 Could you talk us through how you wound up in the SpiegelYurt - was it a particular show last year?

I saw Lucy Hopkins's show in the SpiegelYurt last Fringe and not only loved the show but fell in love with the room. It's got a slightly magical feel to it. I thought it would be an interesting experiment to do a stand-up show 'in the round' and am happy to say I'm really enjoying it.

I'm in the room as the audience walk in (it's fun chatting to them while they're picking their seats) and enjoy watching their reaction to seeing just how nice it is inside!

What's been the most interesting thing about doing stand-up in the round?

You have to be aware of not missing certain parts of the audience for too long. I tend to stay slightly on the move, stopping now and again. There have been a couple of nights I've realised that one bit of the room has been getting a bit too much of my back so I make sure to then re-address the balance and spend a bit of time with them.

You get into some big topics during the show - any interesting discussions afterwards?

It's funny the things that linger in people's minds after a show. I make a little reference onstage to a crystal I wear around my neck every day. I reckon that crystal is the thing I'm most asked about post-show. Each day I ask if there are any crystal wearers in (I'm cynical about them but mine was given to me as a gift so I'm very fond of it), and very rarely get a yes, but people always ask after.

It makes me think there is a whole underground crystal scene, full of ashamed crystal wearers.

You reckoned that you'd forgotten a bit at the end of Friday's show - did you ever work out what it was?

I did! It was a story about a vegan protest I witnessed in Melbourne. It's about young vegan activists and the response they got from the general public. It took me until the next morning to work out that was the bit I'd forgotten. The fact that the show didn't suffer from me missing it makes me think it might not be crucial...

How has your Fringe been generally? Did you have a solid plan for how to have a good month, off-stage and on?

I've loved this Fringe so far. Over the years I've learnt to just do my own thing and not worry about anyone else. It's the only way to truly enjoy life really. I've actively downsized to a small fun room which means I don't have to spend a fortune on big pictures of myself around the city (which I never felt comfortable with) in order to fill the room.

I write the show I want to write and tend to attract a really nice audience. I see the show each night as the most important thing, rather than thinking 'what could this Fringe lead to'. It's the most mentally healthy way of doing comedy!

Do you have any recommendations for other Fringe shows worth catching, comedy or otherwise?

John Kearns's show this year is an outstanding hour of comedy. He's probably my favourite of all us. He can squeeze more comedy into a raise of his eyebrows than most comedians can into a full routine. He also manages to get genuine pathos into his shows. It never feels cynical.

Another cracking show this year is Jessica Fostekew's. She's always been excellent but this show is a proper statement of intent. It's so consistently funny while also discussing some big topics. I can't imagine there being a more consistent show at the festival.