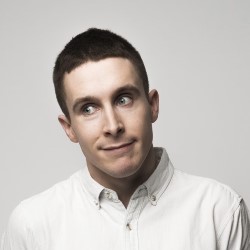 Amused Moose Comedy Award winner and Foster's Edinburgh Comedy Award nominee Larry Dean returns to Edinburgh with a brand new hour of 'fascinatingly funny' (Evening Standard) comedy following his debut stand-up tour and a stint at the Melbourne International Comedy Festival. Expect 'unmissable' ***** (EdFestMag.com) storytelling from one of UK comedy's fiercest new talents. As seen on Live from the BBC and Comedy Central at the Comedy Store. 'A charismatic stand-up natural whose conversational style makes it all look so easy' (Chortle.co.uk). 'The audience lap up his cheeky-chappie shtick' (Guardian). 'Superb timing... deserves much success' **** (Mirror).

A rising star in the world of stand-up comedy, Larry Dean is in Edinburgh with a tight hour packed with jokes. His routines are all loosely wrapped around the central story of the time he was sitting in a café with two murderers... that premise alone should be enough to convince you to check him out.