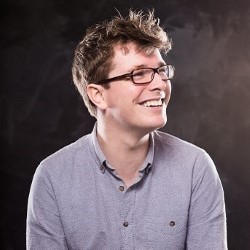 Kieran presents his debut stand-up show about how we all say and do really quite weird things and it's probably a good idea to keep an eye on them. He likes heavy metal and grammar, so this will be wild, but also correct. He's the one who played all the girl parts in Fringe sketch veterans WitTank. 'Impressively funny...Terrific material' (Scotsman). 'Genuinely funny...very talented comedian' **** (Threeweeks). Praise for WitTank: 'Masterful' (Sunday Times). 'Excellent, inspired and resolutely daft' (Independent). Star of Live at the Electric (BBC Three) and Sketchorama (BBC Radio 4).