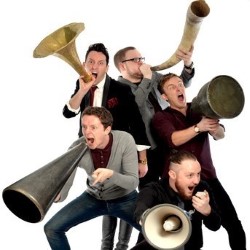 Improv / stand-up performed on the following days in August 2015...

It's back... An entirely unique entertainment experience every night with the quickest wits in comedy and their astonishing special guests. The total sell-out smash-hit returns to Edinburgh with a hefty dose of The Noise Next Door's trademark off-the-cuff madness, two stand-up stars, and some once-in-a-lifetime comedy curiosities. Side-splitting gags! Mind-blowing songs! Finely tuned anarchy! 'Hilarious' (Daily Telegraph). 'Comedy gold... Staggeringly well executed' (Guardian). 'This is 21st-century comedy at its very finest and funniest.' (Stage) As seen on BBC One and BBC Three. For daily line-ups follow @NoiseNextDoor or go to www.thenoisenextdoor.co.uk.

The Noise are back in town, after seven sell-out runs to critical acclaim, the UK's premier improv comedy troupe perform their late night variety show The Comedy Lock In at The Pleasance Edinburgh for the month of August, it has guests doing games, stand-up spots, songs and of course improv. The Noise have been performing their own distinctive brand of off-the-cuff comedy since they met at university, so that's 8 years gigging + 80000 miles travelled together = amazing comic chemistry!

Last year they were nominated for a Chortle Award and in the past 12 months The Noise have become a regular feature on BBC1's The One Show, appeared on BBC3's Edinburgh Comedy Fest Live, completed their second national tour, written and performed in a trailer for ITV2's Britain's Got More Talent which featured Ant and Dec and Simon Cowell, and are currently developing shows for Channel 4 and BBC1.

The Noise Next Door

Sam Pacelli - His Italian heritage has instilled him with a fiery passion for life, a flagrant disregard for traffic laws and an uncontrollable need to offer parmesan and black pepper to anyone he sees eating.

Tom Livingstone - Spent his formative years in the deepest, darkest corner of rural Devon proving that size did not always directly relate to suitability for manual labour. Following intellectual endeavours instead, Tom is now technically the world's most educated troll.

Matt Grant - Matt was born in Kenya and raised in Kent. When faced with a challenge, Matt either hunts the problem with a spear or holds a bake sale in its honour... Mixing the two approaches rarely ends well.

Tom Houghton - Tom was born in North Yorkshire but was raised on army bases all over the globe where he learnt useful skills such as cheeky eyebrow raising, moIsturising on a budget and the words to every Disney film... The usual military stuff.