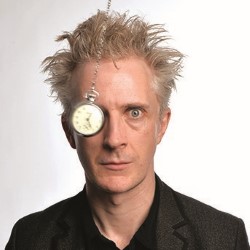 Described as a comic-philosopher (LondonIsFunny.co.uk), Stuart Black's social commentary is truthful, intelligent and eloquent. Stuart Black's style and intelligence set him apart as a truly original and independent voice in comedy.

For those wanting an evening of stand up comedy away from the norm look no further than comic Stuart Black who returns with his new show Lemsip and Cigarettes. This show is the follow-up to last years critically acclaimed hour The Crossroads.

Stuart embodies the comedy version of sex, drugs, and rock 'n' roll. The show is smart stand up comedy with poetic language that contains funny social, political and religious commentary alongside personal anecdotes.

He covers a wide range of topics in his new show Lemsip and Cigarettes that include the lies and pseudo science of cosmetics companies, movie violence, love and dating, how to how to become a millionaire and hypnotherapy along side more tales of debauchery from his younger days.

Black's comedy comes from his real, but incredible, life in a way that follows in the footsteps of Lenny Bruce, Bill Hicks, and Doug Stanhope (who he has been compared to). This is the comedy of truths. Truths from a life less ordinary. His show examines these truths in a brutally honest and hence refreshing style.