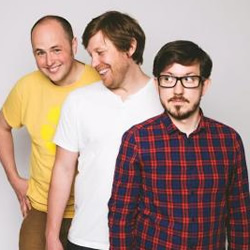 Pappy's do the Pleasance a massive favour and step into the empty cabaret bar for 3 nights.

Pappy's (Britain Best Live Sketch Team, twice nominated for the Edinburgh Comedy Award) do the Pleasance a massive favour and step into the empty cabaret bar for 3 nights. Performing some of their classic sketches, some new bits and some bits that will come across as new because they've forgotten how they went in the first place. Come along and watch three out of shape men in their thirties revisit the site of former glories. Dignified? No. Slick? Absolutely not. Funny? Coming right up!

Pappy's have been nominated twice for Best Show at the Edinburgh Festival (2007 & 2012); twice won the Chortle Award for Best Sketch Performers (2008 and 2013); and their hit podcast, Flatshare Slamdown, won a Loaded Lafta Award (2012). They have also written and starred in two series of their own sitcom, Badults on BBC 3. The first of which was nominated for Best TV Show at the 2014 Chortle awards.