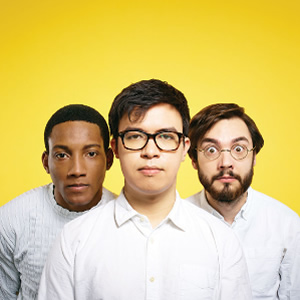 Sketch comedy has been totally outstripped by stand-up in recent years. On TV stand-ups are inescapable, while the Guardian described TV sketch comedy as now "virtually a thing of the past". Yes, there have been some gems like Cardinal Burns (and on radio Small Scenes) but broadcast sketch shows have been pretty thin on the ground.

The form hasn't gone away though. It's been growing and developing on the live stage watched by a cognoscenti audience. Pappy's have long been a live favourite alongside the brilliant lo-fi double act Two Episodes Of Mash and the all-female Birthday Girls. This Edinburgh Fringe though seems to mark the year when sketch comedy broke through to wider attention. Leading the pack are the newly formed and Edinburgh newcomer award nominees Daphne. (Great to see a woman's name as a sketch group moniker incidentally, as I once did a sketch show with Barry Ferns named Doreen - too meta for its own good, it did get some good notices in amongst general bemusement.)

The Guardian described Daphne's show as "extreme slapstick and fresh, uneasy jokes". They are from the Invisible Dot stable of offbeat acts and are alumni of the comedy breeding ground Cambridge Footlights. (You are surely aware of the Footlights' stunning grip on modern comedy? They produced Mitchell & Webb, half of Monty Python, Peter Cook and Dudley Moore etc etc etc.)

Two more great sketch troupes are made up of ex-Cambridge Footlights members, The Pin and Sheeps. The brilliant Sheeps explode the sketch form by (amongst other things) performing the same sketch in different variations over-and-over again for an hour. (I had this idea years ago goddammit while listening to Bach's Goldberg Variations! Oh well. I just thought it, but they actually went and brilliantly did it.)

This current wave of ex-Footlights acts seem to me to have their roots in the 2006 Footlights show Niceties which featured Simon Bird and Joe Thomas. I saw it at the time and, while not loving it, I was struck by its style. It was all low-key social awkwardness and oddity, and was totally different from the then mainstream of sketch comedy. 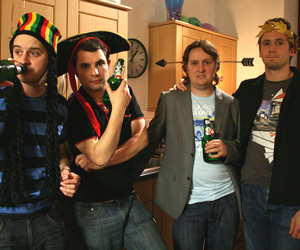 Cowards (Footlights again) exploited this style to the max taking it onto radio and TV. With no running characters and no catchphrases, strange dilemmas and odd conflicts abounded. Also from this time was the sketch group House Of Windsor with Footlighters Bird, Thomas and Jonny Sweet. Such was the buzz around them a few Edinburghs ago that when I got in free to their Underbelly show on a company pass I refused to relinquish my seat in the sell-out audience to a paying customer (Sorry! It's okay though. We all ended up somehow squeezing in.)

But Footlights haven't got it totally stitched up. Brilliant oddballs (and Chortle newcomer award winners) Gein's Family Giftshop formed post university in Salford. On the gross-out side of things we have the all male Late Night Gimp Fight and the female double-act Twisted Loaf, picking up the sick We Are Klang baton and running with it. Chortle memorably described Gimp Fight as a "gloriously funny spunkstorm of bad taste."

Such is the buzz around sketch comedy now that I am sure I have left out some great examples. And those I have mentioned are acts who are making a name for themselves. There are tonnes more at the grassroots developing their stuff, some of whom have been at this year's Camden Fringe including Mixed Doubles, Bounty of Beards and two groups featuring alumni from my own sketch courses, Monkey Wedding and Chaos Theory. With so much happening live it's surely only a matter of time before this explosion of sketch comedy starts to be reflected on TV and radio ending the broadcast sketch comedy drought.