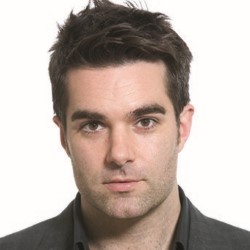 Ever imagined a parallel universe where Phil Collins was murdered as a schoolboy by an angry, time travelling cuckolded Greek? Milo McCabe has.

One evening in October 2014, after an argument with his wife (since resolved, thankfully), Milo McCabe sat down at his desk and fuelled by a mix of righteous indignation, (and the inability to do anything else), wrote an impossible and ridiculous show that he presumed would never see the light of day anywhere other than in a forgotten file on his laptop.

Four hours later a tale featuring national stereotype based time travel, Elton John as a vengeful mechanic from Walthamstow, Bob Geldof singing awful techno hits from the 90's and a spectral Phil Collins was sitting there, begging to be performed to confusion and wonder.

Best described as a 'time-travel based one man sketch narrative that involves removing Phil Collins from the universe as a performer' this show has been blowing preview audiences minds up and down the country.

Please come and let it blow yours.

Alongside TV appearances on Blue Go Mad in Ibiza (ITV2), Live At The Electric (BBC3) and Benidorm (ITV1, aired in 2016), Milo McCabe is an established character comedian with several successful Edinburgh runs under his belt.