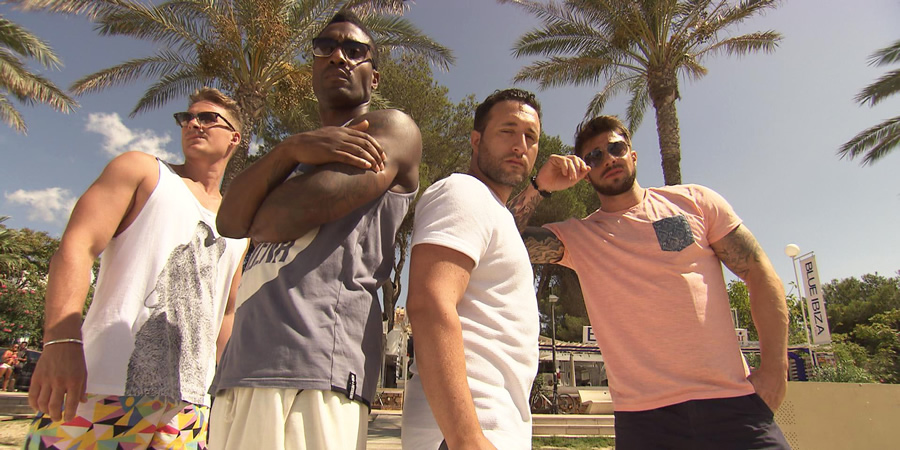 Prank show based around pop group Blue. The boy-band are tasked with running a bar in Ibiza... but everyone else is an actor

ITV2 unleash boyband Blue on Ibiza as they embark on a brand new challenge to take over a chilled beach bar and turn it into a fun-seekers' hotspot.

This four part series follows Duncan, Simon, Lee and Antony as they "all rise" to the challenge of working in a beach-front bar in Ibiza's favourite party destination, San Antonio.

However, all is not what it seems for Blue, who soon find themselves at the mercy of a chauvinistic head bar man and a flamboyant PR representative as they become embroiled in amusing gaffes and situations at the partying hotspot.

Unbeknown to the band their 'staff' and acquaintances are actors and comedians, whose deliberately outlandish comical creations are contrived to cause mischief and make their two weeks in Ibiza a stay they'll never forget!

With exclusive access as the drama unfolds, viewers will be able to follow the popular quartet as they have just 14 days to try to make their bar a success whilst falling foul of hilarious hoaxes all specially created to cause maximum mayhem.

Blue say: "We thoroughly enjoyed running the bar and definitely see a potential future in this for Blue, but we still can't believe we were fooled into believing our closest confidants in the bar were genuine! We've got into some unusual predicaments during our time in the band, but what the team tricked us into on the show was unbelievable... we're still shocked we didn't guess!"