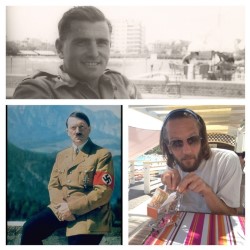 My grandpa was a Royal Engineer in France, North Africa and the Middle East during the Second World War. He wrote hundreds of loving, funny and insightful letters home to his wife. 70 years on, this show is about those letters, including stories of Dunkirk, the Blitz and a drunken attempt to climb a pyramid. 'A superbly written piece of work which is poignant, thought-provoking and above all incredibly funny' **** (Chortle.co.uk), 'a highly skilled and very, very funny comedian' **** (ThreeWeeks), 'a gifted comic' (Sunday Times). As seen on Russell Howard's Good News.

Luke's grandparents (Stanley and Kate) met at a dance in 1935, the same year that Hitler ordered the rearmament of Germany. Historians will tell you that the latter was the more significant event. Really? If Stanley and Kate hadn't met at that dance, this show wouldn't be happening. We're in Back To The Future territory.

Four years later and Britain was at war with Germany, so Stanley joined the Royal Engineers and set off for France. He would find himself on the beaches of Dunkirk before being posted to North Africa, while Kate had to contend with bringing up two daughters and the Blitz.

Recently Luke was given over 200 letters his grandfather wrote home to Kate during the war, discovering an extraordinary story by modern standards, though probably entirely normal for the millions who had their lives turned upside down by Hitler.

This passionate, personal and very funny show has been written to mark the 70th anniversary of VE Day and includes tales of love, duty, incompetent censors, meeting the King and a drunken attempt to climb a pyramid.

Award-winning stand-up comedian (Hackney Empire New Act of the Year 2007) Luke Toulson, has been bringing highly regarded shows to the Edinburgh Fringe since 2005 when his double-act Toulson & Harvey was nominated for the Perrier Best Newcomer Award.

After several successful solo shows, Luke appeared on BBC Three's Russell Howard's Good News and his 2013 Edinburgh show (I Don't Know How I Feel About My Kids) was selected by Amused Moose as one of the Top 10 Comedy Shows at the Fringe.