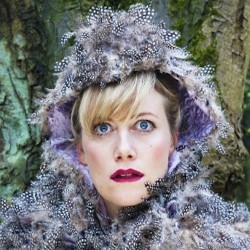 Pheasantly friendly Lily Bevan, who can pluck pheasants until the pheasant pluckings done, features faces and characters from the fearful world of self-help. Drawing on mostly real, weird events and encounters (including a terrible yoga teacher who has problems with extended mixed metaphors), watch as Lily both narrates and acts out a trip of a woman on a surreal journey of self-discovery to become a more 'pleasant fucker' (no, this is not about Tinder). Is laughter the best medicine? After seeing this show, it certainly will be.

Lily currently works as a researcher for actress/writer Emma Thompson and the two are currently co-writing a new British screenplay. As a writer, she co-wrote the sell-out Christmas show Stephen & The Sexy Partridge (Trafalgar Studios West End), Avocado (King's Head Theatre and Playwrights Horizons, NY) A Stab In The Dark for Latitude festival and most recently Café Red, which enjoyed two sell out runs at the Trafalgar Studios. She is currently writing on I Live with Models (Comedy Central) and also blogs for the Huffington Post UK and USA. At last year's Edinburgh Festival Fringe, she wrote and starred in Mock Tudor, which is also now in development with Kudos for a TV sitcom. A BBC Radio 4 show is in the works with Sally Phillips due for broadcast in December.

A classically trained actress (R.A.D.A and a term at Phillipe Gaulier in Paris no less), Lily has performed in a vast range of pieces including A Voyage Round My Father (Donmar Warehouse), Kindertransport (Shared Experience, Hampstead Theatre and national tour), The Miser & The Hypochondriac (Belgrade Theatre, Coventry), Dr Who (BBC) & Rumpole of The Bailey (BBC Radio). Her directing credits include The Death of All Elephant Elders at the Finborough Theatre.