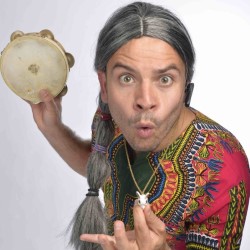 Join award-winning character comedian Joe Rowntree for the rare and wonderful specimen Morgan Berry: Pet Bereavement Counsellor. Rabbit Specialist. Born in Barnsley, raised in Africa - Bafrican! The car wash is in trouble. Morgan must save it. Can his online course in Pet Bereavement yield dividends and stop it from going Watership Down. 'It is his use of very specific and nonsensical language that is so captivatingly funny' **** (Chortle.co.uk). 'Short of breath and with tear drenched cheeks, we watched the show end as unexpectedly as it began' **** (InformedEdinburgh.co.uk).

Morgan helps people cope with their pet loss by performing his very own, self styled and unique method of pet counselling called: 'Freedom Heeling'. FH is a heady and exotic mix of ancient wisdoms, tribal rituals and laughter therapy along with a few coping strategies that he learnt from his childhood witch doctor and more recently from his online course in Pet Bereavement (www.morgan-berry.com).

As a baby, Morgan was abandoned by his parents. He was found on a landfill site, inside a microwave surrounded by rabbits. He was taken into care and moved to an orphanage in Barnsley. After 3 months, he was adopted by a Botswanan couple, who were on a gap year in Barnsley. They took him back to live in Botswana, to grow up on a farm and he became part of the E Bok Bang Wak Etse tribe. There, Morgan fell in love with a local woman by the name of Jub Jub, who encouraged Morgan to go back to England, open up a car wash and look for his real parents in Barnsley. They made a good living from the car wash, but the recession hit and finances became tight... at which point, he decided a change of direction was needed.

Morgan Berry is the character creation of comedian, actor and TV host Joe Rowntree, who has performed stand-up all over the world. He recently filmed Evil Genius for the Discovery Channel, but Joe's television career first started back in 2001 writing put-downs for Anne Robinson on the Weakest Link (BBC 2). He quickly moved in front of the camera and, after appearing in all 6 series of the award winning hit Sky1 show Brainiac: Science Abuse, hosted two Brainiac: Live UK tours. Joe's other television appearances have included The Sack Race (BBC 2), In Your Face (Bravo), The Richard Hammond Show (ITV) and an episode of Dave's One Night Stand (Dave).