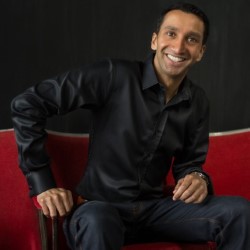 Star of brand new BBC Three sitcom Fried and CBBC's Ultimate Brain, Best Newcomer nominee Imran Yusuf returns with a special edition show of his latest, cutting edge socio-political stand-up that's nothing short of starting a movement! Join Imran as he puts the world to rights whilst deftly defeating all prejudices with his cheeky charm, calling out the bullshit and bringing people together against the renaissance of bigotry that threatens to take us into a dark age. Come join the revolution, it starts here! 'Sharp, passionate, uplifting.' **** (Telegraph)

Following his success at last year's Fringe, where he was featured in The Telegraph's 'Top Jokes of the Fringe', Imran Yusuf returns to Edinburgh this year with a special edition version of last year's show Super Roar of the Underdog - Turbo X: HD Remix.

The show builds on his first debut Edinburgh show, tackling brand new areas as a comic, making cutting remarks on the state of society and its decadent practices to ingratiate our own egos whilst surreptitiously exploiting the disadvantaged and the entire developing world.

Imran has established himself as a truly unique voice in the world of comedy, becoming known for seamlessly weaving socio-political satire with heartfelt introspection in his charmingly endearing trademark style. Of East-African Indian descent, born in Mombasa, Kenya but raised in London with a brief stint studying illegally in the USA, Imran has travelled much of the world, taken his stand-up to India, and become an original voice that embodies the multi-cultural wealth that exists in modern Britain.

Since being nominated for Best Newcomer in the Foster's Edinburgh Comedy Awards in 2010, Imran has appeared on Michael McIntyre's Comedy Roadshow on BBC1, toured the UK twice with his solo shows An Audience with Imran Yusuf, and Bring The Thunder, is a regular member of the team-based topical comedy show The Cutting Edge at The Comedy Store in London, and most recently featured as the star of CBBC's Ultimate Brain: Mad Lab, and brand new BBC Three series Fried which will air this summer.