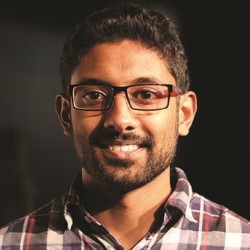 In a world where comedy can discuss anything, Hari has decided to start off lightly and share his hilarious musings on death and immortality. Well he is 27 now...

Inspired by the book Immortality by Stephen Cave, the physicist-turned-comedian will examine the four ways we think we can live forever: staying alive, resurrection, the soul and leaving a legacy. A dark subject covered in a light way, Hari looks at the aftermath once the bucket has been kicked, all with his affable style and self-analytical humour that he's known for.

Hari started performing comedy regularly in 2011 as part of the Edinburgh Revue, where he won their annual stand-up comedy competition in 2013. Since then, he has gone on to appear in the finals of many other comedy competitions including the BBC Radio New Comedy Award and Chortle Student Comedy Awards. In addition to his live work, his radio credits include BBC Radio 4 Extra Stands Up and Hardeep at the Stand (BBC Scotland).