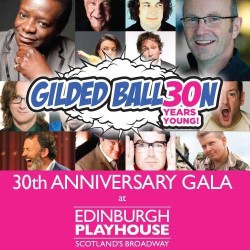 For one night only, comedians from the past 30 years of the Gilded Balloon unite at the Edinburgh Playhouse to celebrate the iconic Fringe Venue and stars that have been made along the way. Hosted by Fred MacAulay and Adam Hills, the line up includes Johnny Vegas, Alan Davies, Stephen K Amos, Barry Cryer, Aisling Bea, Jason Byrne and The Boy with Tape on His Face.

Seán Cullen and Phil Nichol, of Corky and the Juice Pigs, also make a special appearance, alongside a very rare slot from Greg McHugh, re-enrolling as Gary: Tank Commander.

Karen Koren, Artistic Director of Gilded Balloon, says: "I can't quite believe it's been 30 years and I am so happy that lots of performers who started out at the Gilded Balloon are joining us to celebrate. The Gala is in aid of the CdLS Foundation, a charity dear to my heart."