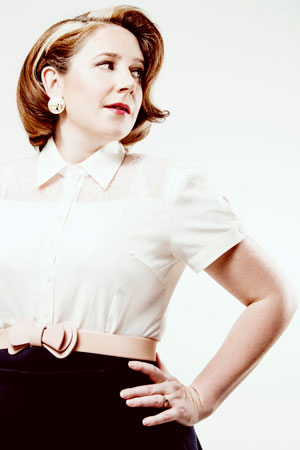 Viv Groskop tells us about her lengthy and varied comic career, and first Fringe stand-up show in 2015.

I first performed in a sketch group called Juicy, Fruity, Fresh and Cheap at a Footlights show in Cambridge hosted by Stephen Fry in 1991. I partly loved it. But I also got The Fear. I then did nothing else on stage for 20 years and became a writer instead.

In my mid thirties I decided to stop being pathetic and did a handful of gigs. This led to me hosting Jo Brand's book tour in 2010 and then attempting to "crack stand-up" by doing 100 gigs in 100 consecutive nights in 2011. I did not crack stand-up during this period but I did spend £400 on Diet Coke.

In 2012 I was a semi-finalist with So You Think You're Funny, reached the finals of Funny Women and won Maestro Impro. In 2013 my book I Laughed, I Cried, a diary of the 100 nights, was published by Orion and reached No 1 in the Amazon Comedy bestseller charts on pre-release. I performed a show based on the book with Freestival at the Fringe in 2014.

This year (2015) is my first solo stand-up hour at Edinburgh with Say Sorry to the Lady at The Stand.

It's about the great British cult of apology. Why do we apologise so much? We must stop. (Sorry, I've reached the word count.)

Because I love performing, I love the audiences in Edinburgh and I have always wanted to perform at The Stand. Of course there is anxiety. But there is anxiety about anything worth doing. (Copyright: Dalai Lama via Oprah magazine.)

I am exit-flyering Katherine Ryan's sold-out show Kathbum (Stand 3) which is just down the corridor from my (more modest) room. That is about as cunning a stunt as I can manage.

According to my calculations, I should make at least £1.57 million. It might be more, I've been cautious with my spreadsheet.

Anything involving comedian/promoter/Fringe legend Bob Slayer. I did a chat show called The Night I Died, produced by Suzanne Azzopardi (Literary Death Match), for two years running at Bob's Book Shop, with guests like Lucy Porter, Scott Capurro and Katy Brand talking about their worst ever gigs. I always expected to turn up to the venue and find Bob Slayer standing naked in the middle of the room. But usually he did that much later in the evening.

These are Fringe traditions for me: Austentatious, Jo Caulfield, Tom Allen, Mary Bourke. This year I'll also see Laurence Owen, David Mills and Chris Betts as they all did their previews at the Dead Parrot Society in Teddington (the local gig I MC) and I have a little soft spot for all of them. I also recommend Sy Thomas, Harriet Kemsley, Evelyn Mok, Tez Ilyas, Sofie Hagen and loads of other people who I have now forgotten and will hate me for not putting them here. I'm gutted Tig Notaro[/[] is not here this year but I'm planning to see Lucie Pohl's Cry Me a Liver instead. Tig Notaro's Boyish Girl Interrupted (2013) was the best Edinburgh show I've seen.

Kate Copstick (the legendarily terrifying reviewer). But I already bumped into her yesterday and she was adorable.

All 1,700+ offerings should be guaranteeing fun times so I won't say "guaranteed fun times". (Although the fun times are guaranteed.) I've been told that my show is life-changingly cathartic if you're a bit British and prone to over-apologising. Sorry to brag.