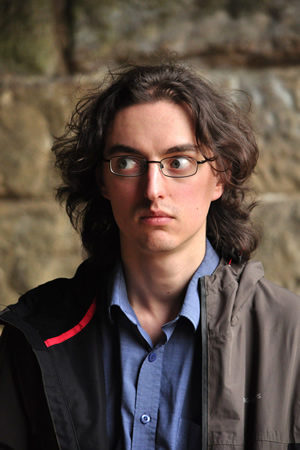 We really like Peter Brush's show title: 'Older Than the Oldest Dog That Ever Lived'.

I started gigging properly in 2009, I had dipped my toe in the water before at a couple of student nights, but then I left it for years. It seemed to be an easy thing to put off.

Anyway, since then I haven't stopped and I appear to be getting away with it. I was in the BBC New Comedy Award final a couple of years ago, have some radio comedy writing credits, seem to be gigging at a level I'm fairly happy with.

So things are ok, I don't think I've hit a brick wall. If you are always getting a bit better as an act then other things should hopefully follow that, right now I'm the best I've ever been, but I always am, that's the way I try to look at it anyway (although I do like to bitch about people who are more successful of course).

A paranoid romp about one man's quest to halt the progress of time, whilst all the dogs he's ever known slowly die off.

Felt like the right thing to do this year, and I'm a man who runs on instinct and never questions it.

That isn't to say that this strategy has always served me well mind.

I've blackmailed some friends of mine into coming to each show, and when they leave the room at the end they are going to loudly mutter things to passersby like 'oh that was so funny, I've never seen anything like it', or other words to that effect. If they keep that up all month then their families will be returned safely. 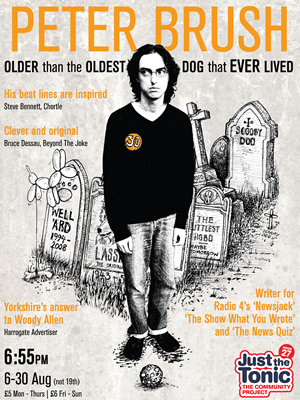 I had this chocolate bar once that they'd deep fried.

The Louis Armstrong Band will be playing music in the intervals.

I'm going to try and be diplomatic here, but I really don't want to bump into that guy, you know, that guy in comedy that we all hate, you know the one (if you are involved in comedy and you are reading this and don't know who I mean, don't worry, it isn't you).

I don't want to sound desperate, but, I need this.