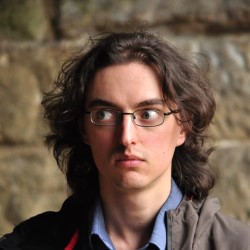 A supernatural experience at Christmas sparks an hour of amusing musings on paranoia, mortality and whether or not to eat brown rice. Also contains ghosts, pet snakes, haircutting advice and a rundown of your various options for the afterlife. Debut hour from the former BBC New Comedy Award finalist. 'An imaginative use of language and obtuse angles of thought that produce distinctive and eclectic gags ... his best lines are inspired' (Chortle.co.uk). 'Clever and original' (Bruce Dessau). 'Yorkshire's answer to Woody Allen' (Harrogate Advertiser).

When you're 30 years old you're now older than any dog that you meet - is that why they don't understand your jokes?

Find out how a supernatural experience last Christmas led an award-winning comedian to confront some of the bigger questions in life that we'd usually rather avoid, like, what is the one true faith? How do I look after a pet snake? Are people filming me?

Peter Brush is a former BBC New Comedy Award Finalist and winner of the Harrogate Comedy Festival Comedian of the Year. He has written for Radio 4's The News Quiz, The Show What You Wrote and Newsjack, and supported Arthur Smith during his 2013 tour.

He currently performs for: Jongleurs, The Stand, The Frog & Bucket, Manford's Comedy Clubs, Kill For A Seat, Rob Riley Productions, Toby Jones Productions, Buzz Comedy (Agraman), XS Malarkey and various others across the UK. This is his debut hour.