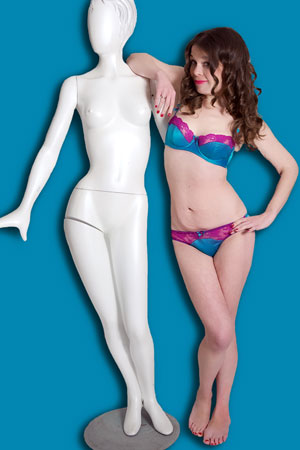 Comic Juliette Burton answers 10 questions as she returns to the Fringe with another run of Look At Me.

I started back in 2011 as part of Mace and Burton. I did my debut solo show in 2013, toured around Australia for 3 months, returned in 2014 with a Fringe full of sell out shows and 5 star reviews. I've won a couple of awards, met some awesome people. I'm excited to see what comes next!

Award-winning, topical, surprising, 5 star docu-comedy about appearances, identity, mental health. Laugh and think! Is what we appear to be who we are?

Lives can change there. I know mine did. Also the Fringe is addictive and I get easily addicted to things!

Flyering! Not exactly a revolutionary plan but I'll be out there enthusing to people about a show I believe in.

My grandmother taught me never to discuss money in public. But she won't be reading this, she doesn't go to comedy shows. And she's dead. Anyway, it's an investment in my career. I love it, and you can't put a price on love! Although selling out would be extremely nice...

Bumping into comedy legend John Lloyd on the Royal Mile and him asking to come to see my show, then performing on his Quite Interesting Pick of the Fringe at BBC Potterow.

My dad. He ought to be at home on the farm managing the harvest.

It's award-winning, repeatedly sold out last year, newly topical, makes you laugh AND think. Also, there's only 6 chances to see it and I'll give you a hug or a high five afterwards plus you'll leave feeling AWESOME.

'Juliette Burton: Look At Me' is at 4pm at Gilded Balloon on 16-21 August. Listing