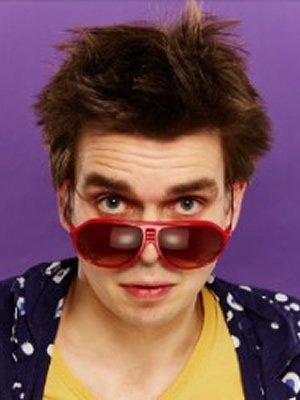 Joz Norris explains why he doesn't want to see his old flatmate Tom at this year's festival...

I've done two solo Edinburgh shows so far, a silly bit of character nonsense in 2013 and a silly stand-up show about dating and growing up and skittles last year, both of which played a few different festivals and got some lovely praise from critics and audiences.

I'm also a member of the Chortle Award-nominated Weirdos Collective and have worked on most of their projects over the last few years, and I do a lot of comic acting as well. I've done a few things with Turtle Canyon Comedy, as well as a sketch pilot for Channel 4 with Hoot Comedy.

Currently I'm playing Toby, the ineffectual intern, in the Shambles webseries from Wild Seed Comedy, and coming out soon is a webseries written by and starring myself and Ralf Little about dating called The Girl Whisperer.

I'm very happy with how things are at the moment, though I try to never get complacent - I always look back on last year's show and see the things I can work on more than the things I did right, so I always feel like there's more work to be done, which I think is a good attitude.

I try hard to express an inexpressible feeling by putting a toilet seat on my head, clapping my hands and remembering family stuff.

I think the Fringe is an amazing opportunity to just set yourself a gauge by which to measure your progress each year. People think of it as a huge market where everybody's competing to be noticed, but it's more of a personal thing than that. If you can spend a year incubating an idea, and trying to get it across as best you can, and trying to improve on what you did last year, and you can gradually win over more people and improve each time, and feel like you're closer and closer to doing something unimproveable, then you're doing it right.

I dunno if I'll ever do anything totally unimproveable, I think the impulse to progress and get better is an important one. But I think the stress to be noticed and to sell out and to be a hit is all misdirected, really. I'm going to try not to stress out too much this time.

I've printed "Hey Guys" on some stickers and I'm gonna put them everywhere. I chose a vaguely attention-seeking title, so I figured I'd make the best of it. Beyond that, my plan is just to be as good as I possibly can be every day. Every single audience member is your best possible advert, so if you can win them all over every day and get them to talk about you, then that's worth more than a big publicity stunt. Maybe.

I'm doing Bob Slayer's Heroes of Fringe model this year, where the acts nearly always end up making profit. He's pioneering the Pay What You Want model, where people can buy a £5 ticket in advance to guarantee a seat or turn up for free and make a donation. It means acts either end up having proper sell-out runs and making a lot of money or, even if presales aren't total sellouts, they can still make profit from voluntary donations like a free show can. I'm hoping I can make a little bit of profit this year overall, as I've kept my costs low. 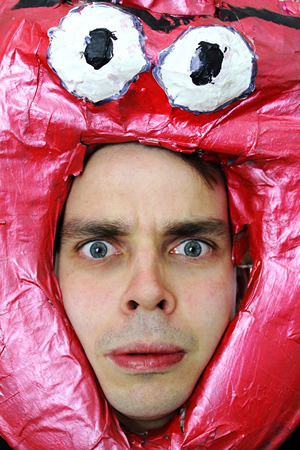 My weirdest Fringe experience was my decision to burst into a friend's mixed bill show wearing a gold thong. The guy booking it said to run in and surprise the acts for a bit of fun, and I went a bit far on the assumption that I knew all the guest acts. Turns out I didn't know any of them, none of them had been told to expect me, and all of them just thought I was a stranger who had snapped as a result of Fringe stress. Also, one of my testicles fell out and everybody pointed at it, which leaves its mark on you.

As many as possible, but there are particular ones I'm very excited about, including debuts, comebacks, silly new ideas, loads of great stuff. The previews I've seen that have got me most excited include Marny Godden, Ed Aczel, Pat Cahill, Mark Stephenson, Michael Brunstrom, Harriet Kemsley, Lou Sanders, Eleanor Morton, Will Seaward, Holly Burn, Ali Brice - it's silly to start listing them, really, because as soon as I start it gets increasingly difficult to stop. There's a whole bunch of amazing-looking shows this year, I just hope I get to see enough of them.

You know what, I don't know if I could do a better job than Bob Slayer's done this year with the Hive. I'm biased because it's where I'm performing, but it's an honour to perform at what I think is the consistently best-programmed venue this year, with shows from Ben Target, Pat, Ed, Spencer Jones, Beth Vyse, The Alternative Comedy Memorial Society, Bobby Mair: Loudly Insecure, and so on and so on.

If I could run my own venue I'd probably take the template of everyone playing the Hive this year and add another room and squeeze in a few of my other favourites from around the Fringe, like Luke McQueen and Harriet Kemsley, add a couple of my favourites who aren't doing the Fringe this year like John Kearns, and then I'd book Marillion in to do a late-night cabaret show every day. They could rotate setlists like they do at their Montreal Weekends.

Probably my old housemate Tom, he once shouted at me for being in the shower too long and I got so upset I went and ate dinner in a graveyard down the road to make him feel bad about it, and after that I ran away and went and did my first ever Edinburgh Fringe. I've not seen him since, and every Fringe a tiny, nostalgic part of my brain relives that sad shower and that sad, graveyard-y sandwich. To actually see him on top of the deja vu that August brings would probably push me into a full-on meltdown, and nobody needs that.

The fact is, nobody going to the Fringe is going to be able to see every single good show. Of the thousands of shows there are, statistically hundreds of them are going to be brilliant. That actually makes being a Fringe performer much easier - you don't need to worry about making the best Fringe show there is because it's statistically unlikely. All you can ever do as a Fringe performer is try to make a show that's true to what you wanted it to be, and that you've worked as hard as you possibly can at in order to make it brilliant. The rest is up to everybody else to find it and enjoy it.

If people like the sound of something that's a bit silly, a bit offbeat and a bit unpredictable then they'll love this. But I don't need this to be the show that everybody chooses over everything else. I just need the people who do choose to see it, or who stumble across it, to really enjoy it and to enjoy the culmination of all the ideas that have led me to it. Also, last year's show has already been adapted into a webseries with some big names involved. This year's could well end up morphing into another star-studded set of short films, so if you miss out on this then you might miss out on the inspiration for something everybody's watching in April next year. Just come along if you fancy it, really.