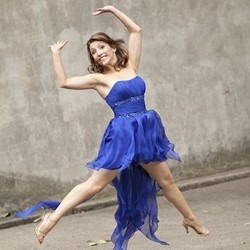 Broadway performer and YouTube sensation Christina Bianco takes you on a hilarious musical comedy journey, showing you what led her to become a multi-faceted, multi-voiced party of one! Christina performs an eclectic selection of your favourite pop, standard and Broadway tunes in her own voice as well as impersonating great divas who have inspired her. Expect celebrity readings, unlikely musical interpretations and an A to Z of 26 bonus impressions during the show! From Britney Spears to Celine Dion to Barbra Streisand, no celebrity is safe. This is one party you won't want to miss!

'Bianco may be known for her impressions, but what audiences will take away from her shows are her humor, charm, and incredibly powerful voice rivaling the very divas she impersonates.' BroadwayWorld

In this new show, Christina shares her eclectic musical and artistic influences. From her New York roots, to global travels, to her love of celebrity divas, Christina will takes audiences on a musical comedy journey, showing audiences what has led her to become a multi-faceted party of one.

Christina performs an eclectic mix of your favourite pop, West End and Broadway tunes in her own voice as well as impersonating the great divas who have inspired her. From Britney Spears to Barbra Streisand there will be celebrity readings, unlikely musical interpretations and an A-to-Z of 26 'bonus' impressions. Musical direction for Party of One! is by Joe Louis Robinson.

Bianco became a YouTube sensation with her diva impression including her renditions of Total Eclipse of the Heart and Let It Go Christina had over 20 million views worldwide which led to her performing on The Ellen Degeneres Show in America, plus ITV's The Paul O'Grady Show and This Morning. Recently, she made her West End debut in Forbidden Broadway at The Vaudeville Theatre and toured Scotland in Tonight From The West End with Kerry Ellis and Adam Garcia. Last year her debut show Divallusion was a sell-out show at the Edinburgh Festival Fringe and won ThreeWeeks Editors' Award 2014. Party of One recently had a 7 night run at The Hippodrome, London.