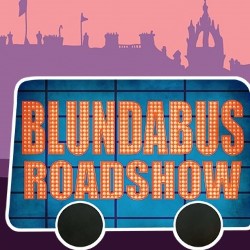 First and last Fringe Wednesdays: Get aboard the BlundaBus Roadshow. We will be driving around Edinburgh creating pop-up adventures wherever we go. Featuring Pat Monahan and Bob Slayer breaking world records. Plus Stompy (Half Naked Chef) the bus conductor and all the Heroes performers from both venues. 'Off the usual comedy map in every sense' (Bruce Dessau, BeyondTheJoke.co.uk). 'A brand of insane merriment that perfectly encapsulates the Edinburgh mood' (Spectator). Limited tickets. Full timetable: BlundaBus.com.