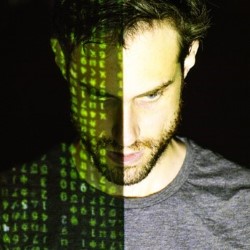 Total sell-out 2013 and 2014. Travelling at the speed of thought in his music production spaceship, the world-class multi award-winning musician and comedian transcends mere mimicry to produce studio quality compositions faster than most could imagine them. The vocal shaman emits and manipulates any conceivable sound with a manic wit that will have you rocking with laughter and shaking your tail feather as a whole album is created live, based on your suggestions. 'An hour of dazzling skill ... The bar for improv has been raised' **** (Chortle.co.uk). 'Breathtakingly talented' (Time Out).

One Album Per Hour sees Beardyman use a collaborative creative process, gathering song titles and genres from his audience suggestions and turning them into a uniquely stylised album produced live in front of their very eyes, with the use of his custom built Beardytron_5000mkIV, a music production space-ship unveiled at TED global which allows him to improvise cutting-edge, studio quality music in real-time allowing him to do things no other musician can.

The past year has been busy for Beardyman. One Album Per Hour was turned into a live web series on YouTube, where guest 'producers' included Jack Black, Tim Minchin and Daniel Sloss. He has released an album on Tummy Touch Records, touring this throughout Europe and the USA. He has appeared on BBC Radio 1, BBC Radio 2 and performed live at BBC 6 Music's Festival here in the UK. In the USA, he was the lead feature on WBUR and has been Today's Top Tune on KCRW, as well as being featured in Billboard Magazine, who have also premiered his next single 'Mountainside' online.

In 2013, Beardyman beat One Direction in the UK charts with the EDM defining Eat Sleep Rave repeat in collaboration with Fatboy Slim. He won the UK Beatbox championships consecutively until nobody else dared to enter. Actor, writer and animator Mike Judge was so impressed with his vocal abilities he personally insisted that Beardyman lent his voice to several characters on the latest series of Beavis and Butthead. As well as becoming a regular face at the Edinburgh Fringe Festival, Beardyman was granted his own show at the prestigious Montreal Comedy Festival, appeared on Conan (TBS) and stole the show at the BBC Comedy Proms at the Royal Albert Hall.

Now One Album Per Hour sees music at its most unique with Beardyman interacting with the audience to a level that few dare, creating a live show, which combines off beat humour and music into one seamlessly improvised experience. It's up to you, the audience, what happens and how the album takes shape, as you can see from the clips of the One Album Per Hour test show in Bristol, where the fate of a panda's allergies and Justin Bieber's music are left to the audience's direction and Beardyman's execution, literally...