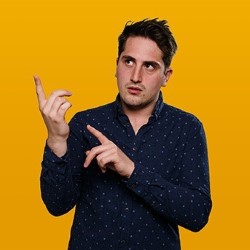 This is the brilliantly funny new show from Luke McQueen, star of BBC's Live at the Electric and the #getsarahback YouTube mini series. 'Luke McQueen fearlessly serves up a weird, sometimes disconcerting, collection of dazzlingly original pieces that constantly pull the rug from under you... A triumph of originality' (Steve Bennett, Chortle.co.uk).

Hi, I'm Luke. Last year I humiliated myself in a number of ways to try and get my girlfriend back. I didn't get her back and to make things worse my family are now ashamed of me. I'm doing this show to try and make it up to them. They don't really think I'm funny and audiences tend to agree with them. As I don't have any money I tried to get someone to sponsor me to do this show but no-one agreed, stating reasons such as, "You're not funny mate" and "You're not funny".

I have however managed to get a job for the month to help me survive. I will be dressed as a giant hot dog handing out flyers for discounted food at "Harry's Hot Dogs". I get paid in hot dogs. I had to sell my TV and bed to afford the festival fees. I now sleep on a "Power Rangers" blow up arm chair. None of that will matter though if I manage to make my Dad proud and have him love me in the same way he loves my brother. My brother is a teacher.

I have been performing comedy since 2006. It has largely been quite disappointing but in 2012 I got my first paid slot which almost covered my travel expenses. In 2010 I got through to the 1st round of the Amused Moose Hot Starlets. I went out to a comedian named Paul Crowe who has since given up comedy and is now a full time electrician.

I have performed at the Edinburgh Festival a number of times: most notably as the unfunny one from a sketch group I was in named The Gadabouts. A couple of years ago my girlfriend dumped me for cheating, which isn't funny in itself but I launched a campaign to make amends and rekindle our relationship entitled Get Sarah Back, and this has proven quite popular. Although not with her. I embarrassed myself in a number of ways to prove my love and BBC Three got in touch saying they wanted to do a documentary about it. Instead they put me in some comedy show named Live at the Electric and now everyone is laughing at me. Here are a couple of the videos of these events:

A rap 'battle', where I was humiliated:

A busy town centre public confession and a solo ice-skating session, where I was humiliated: