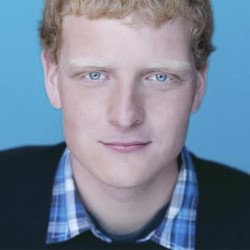 Chasing excitement, John came to the UK from his native Canada in July 2012 to become a famous comedian. After minimal sex, death and theft, he got enlightenment instead... 'A thoughtful and observant comic with enjoyably wry sensibilities' (Chortle.co.uk). ***** (Cream of the Fringe).

Although John Hastings has won copious amounts of awards on his home turf, frankly they mean nothing to us here, zilch. As a committed anglophile this wrangled him, so he decided become a successful comedian in the UK, (where it matters). So he picked up his bags and gags and moved to London in search of stardom and adventure but instead he found enlightenment...

Subsequently, after 8 years of performing stand-up in Canada, John will be performing at the Edinburgh Festival Fringe. See his brand new stand-up show Adventure at the Pleasance Courtyard from 30 July to 24 August.

Besides the numerous, irrelevant in the UK, awards John has won, he was also named one of the XM Top 8 New comedians in Canada. When John moved to London in 2012, he was featured on BBC Radio 4 and BBC.com as a comedy correspondent. Last year he was selected to appear in the Pleasance Comedy Reserve Showcase, following in the path of comedians Jack Whitehall, Holly Walsh and Joe Lycett.

As an actor John was part of the ensemble that won the 2011 "Pilot Week" TV show creation competition presented by Insight production, he was also nominated by the Montreal Critic's Circle for his acting in the Tableau D'hote production of "Seven Stories" and was a graduate of the Second City Conservatory Program.