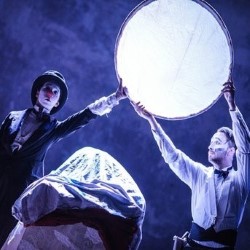 Familia de la Noche return with their five-star, darkly funny sequel to Pinocchio: a rollercoaster ride filled with song, puppetry, physical theatre and clowning. The Greatest Liar in All the World sends the audience careering through the real story behind his infamous origins. But be warned there's a twist and tear in this raucous cautionary tale. 'What it would be like to stroll through the inside of Tim Burton's and Terry Gilliam's minds' (SuchSmallPortions.com). 'Sparkling' (Stage). 'Flawless' (ThreeWeeks). 'Outstanding' (TheGoodReview.co.uk). 'Pure brilliance' (EdinburghGuide.com).