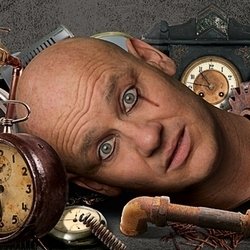 Arguably one of the most intriguingly twisted comedians of our generation and total Fringe sell-out 2009/10/11/12, Terry Alderton returns to this year's festival with yet another hyper-hour of warped wit and contorted comedy. A performer of uninhibited extremes and sheer unconventionality, be prepared for a brand new show of a spellbinding amalgamation of noises, voices, incredible physicality and a mind-blowing insight into the inner workings of a fantastic comedy mind as you've never seen it before.

Having enjoyed a succession of acclaimed national tours, live shows and television appearances, Terry is quite simply the most exciting live act working in comedy today. He has always had to contend with voices and demons in his head which ultimately inspired his ever-present conflicting ego/conscience on stage, a hugely original and ground-breaking technique that often leads him into unpredictable routines so that no two shows are ever the same.

A former Southend United goalie, Terry began his extensive career in comedy when at 18 his first ever open spot lead him to audition for 'new channel' Sky's talent show Sky Star Search. Terry won the competition (beating the likes of outstanding talents such as revered pop-star Chesnee Hawkes) and the comedy industry was never the same again.

Terry has performed in countless TV shows, from Michael McIntyre's Comedy Roadshow (BBC One) to Let's Dance For Sport Relief (BBC), The Royal Variety Performance to Dave's One Night Stand, as well as a regular role in ITV's much-loved drama London's Burning. He has hosted the National Lottery Red Alert with Lulu (BBC One) and his own radio show on London's Capital Radio. He's appeared in feature films such as Guy Richie's Lock, Stock and Two Smoking Barrels and Mel Smith's Black Ball and is known and loved internationally from Melbourne to Mumbai.