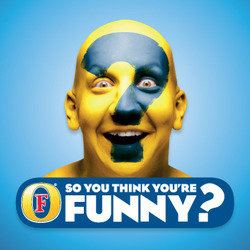 Welcome to the 26th year of the best stand-up comedy newcomers competition in the UK! After nationwide showcases, we are now down to the best from hundreds of entrants. See them battle it out to the grand final. Previous winners include Dylan Moran, Lee Mack, Peter Kay and David O'Doherty! Who will be crowned funniest this year?

The So You Think You're Funny? baby is all grown up! Now celebrating its 26th year, the competition is still fresh and fierce thanks to the high calibre of new talent it attracts. And entering into the second year of the competition with our sponsors Fosters, the stakes are higher than ever!

After showcases taking our judges all over the UK, Foster's So You Think You're Funny? at the Gilded Balloon is the place to be at the Edinburgh Festival Fringe to discover the stand-up stars of the future. And with the partnership with Fosters, there are even more amazing opportunities for all finalists, making the benefits for budding comedians bigger and better than ever!

Nearly every comic working in the UK today has passed through Foster's So You Think You're Funny? since its inception. Nothing speaks to the prestige of the competition like the list of previous winners including Dylan Moran, David O'Doherty, Tommy Tiernan and Rhod Gilbert, to name a few. This is a comedy baptism of fire, with the newcomers given just eight minutes to impress the expert judging panels.

The winners from the Foster's So You Think You're Funny? heats, which happen throughout the Fringe, culminate in a nail-biting grand final on 23 August with a celebrity MC. The overall winner takes home a cash prize and the chance to perform at the Montreal 'Just For Laughs' Festival.