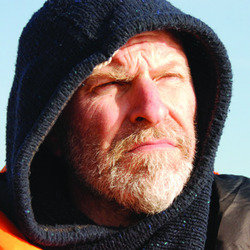 Like most men of his age and delusion, Simon Evans dreams of striking out into The Wild and slipping the surly bonds of suburbia. He remembers, inaccurately, a youth spent drifting like a Home Counties Kerouac through the great European arterial transport thoroughfares, bonding, if not with tribal herdsmen, then at least with truck drivers and the occasional Foreign legionnaire deserter. Living on his wits (which is to say, thieving) coping Britishly with strange and confusing sexual advances, and waking up each day with the sunrise, no matter how carefully he attempted to construct some kind of rudimentary curtaining around his head before turning in for the night on some dismal piece of disregarded municipal verge or other. He remembers, and he yearns.

So what does Simon do, in an effort to reconnect with the spontaneity of his former, unburdened self? He buys a bloody dog. Idiot.