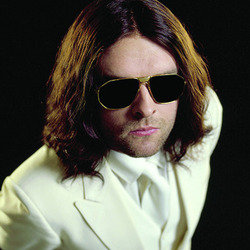 The Reverend is not your average holy man. Join your fellow sinners for this star-studded and hilarious chat show with a twist. Not for the faint-hearted or easily offended! 'Laugh? I almost shat myself... Sacrilegious and divinely hysterical' (List). 'The man is a tornado, a fount of pitch-perfect jokes coupled with quite masterful timing and material that flouts the very laws of censure... Utterly challenging and well-crafted, it is, of course, howlingly funny' ***** (Metro). 'Unforgettable character comedy' (Edinburgh Evening News). 'I liked the vicar. That was proper stuff' (Robert Plant).

The Reverend is not your average holy man. Having managed to offend virtually every religious group and being barred from most places of worship, this true two-fisted Tennessee trailer-trash TV evangelist preaches the word of necessary wrongness whilst making the sinners swing from the rafters... Join the congregation of this brand-new, all-star chat show with a twist...

The Reverend Obadiah brings his love of heavy metal music and hot-tub bible readings to the Edinburgh Fringe 2013, ever keen to expand his flock. Join your fellow flock and special guest sinners for an hour of no-holds-barred God fearing, soul saving and unsolicited sexual confessions.

The Reverend has taken to spreading the word of the Lord on the Radio with his weekly Saints & Sinners round up on Kerrang's breakfast show and also the Devil's Own Television, as well as around comedy clubs all over the UK. He was a regular on all 4 series of BBC's Live Floor Show, for which he was nominated for Scottish BAFTA'S best newcomer award. His 2003 Edinburgh Fringe double-headline show with Frankie Boyle provoked massive, diverse reactions and was simultaneously hailed as the most exciting and original as well as the most offensive and dangerous show on the Fringe. The Reverend's debut solo Edinburgh Festival Show, What Would Charlie Sheen Do? received 5 star rave reviews. The Reverend's alter-ego Jim Muir wrote on 2 series of the Channel 4 Jimmy Carr vehicle, Distraction and subsequently 8 Out Of 10 Cats as well as for BBC Two's Mock The Week. Jim continued to be a key writer for Boyle's own projects on and off-screen until 2012 when his own commitments took over. This live chat show is being developed for TV by Yalli Productions.