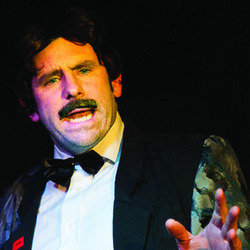 Following a total sell-out run and rave reviews in 2007, Mr Winchester is back in Edinburgh, with sidekick Tommy, for one week only!

Mr Winchester (Dan Skinner/aka Angelos Epithemiou) and Tommy (Tom Verrall) are 'end-of-the-pier' classic entertainers and they are hoping this Edinburgh run will attract a producer who will take them into the bright lights of London's West End.

Mr Winchester and his stooge Tommy are not fans of the modern comedy and entertainment out there at the moment. Their heroes are Barrymore, Les Dawson and Freddie Starr and they wear proper costumes, proper wigs, make an effort - unlike the youngsters today - even though Tommy's on benefits. They do actual jokes, proper funnies, old school and they're proud of it! Come and check out their ventriloquism, dancing and improv as you've never seen it before. The boys love performing live and are very popular in old peoples' homes and on the chicken-in-a-basket circuit.