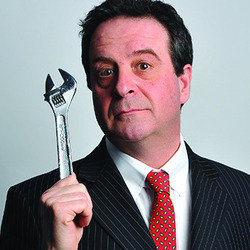 Mark Thomas is well versed in the art of creative mayhem and over the years his troublemaking has changed laws, cost companies millions and annoyed those who most deserved it. Now he returns to what he does best: mischief - joyously bad behaviour with a purpose. After his award-winning show Bravo Figaro, Mark tasks himself with committing 100 Acts of Minor Dissent in the space of a year. Mark catalogues everything from the smallest and silliest gesture to the grandest confrontations and the results are subversive, hilarious, mainly legal and occasionally inspiring.

Over the years, Mark Thomas has poked his nose into enough things to cause a politician to resign, arms deals to collapse, reform inheritance tax law, force the odd multinational to clean up its act a little and accidentally become Guinness World Record holder for political protests.

This August, Mark is back to doing what he does best; mischief, defiance and joyously bad behaviour, occasionally gift wrapped with the ribbons of political gesture. Setting himself the task of committing 100 Acts of Minor Dissent in the space of a year, Mark will be cataloging everything from the smallest and silliest action to the grandest confrontations. The results will no doubt be subversive, hilarious, mainly legal and occasionally inspiring.

In 2010, Mark walked the entire length of the Israeli wall in the West Bank and his subsequent 2011 show, Extreme Rambling: Walking the Wall, went on from Edinburgh to tour nationwide, from the National Theatre to the North Western Reform Synagogue, and was named the Telegraph's Show of the Year 2011. At last year's Fringe, Mark performed a sell-out, critically acclaimed run with his first ever theatre show about his father, Bravo Figaro, which was originally commissioned by the Royal Opera House, won Mark a Scotsman Fringe First and a Herald Angel award and was recently broadcast on BBC Radio 4.

With six series on Channel 4, numerous awards, TV documentaries, three books, a published manifesto, a fifth series of Mark Thomas: The Manifesto commissioned for BBC Radio 4, a Sony Award for his show My Life in Serious Organised Crime, a magazine column that caused a diplomatic incident, the occasional arrest (mainly other peoples, though not exclusively), court cases, giving evidence to Parliamentary Select Committees, stopping multinational infrastructure deals and no small amount of fucking about, it's no wonder that Mark is the UK's favourite political comedian.