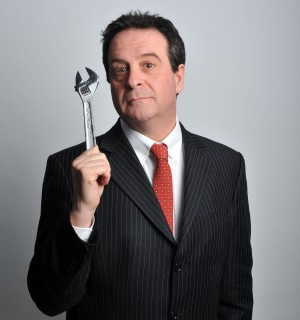 Update. The event was a big success.
View the Report & Video

Mark Thomas, as the basis of his current show, has set himself the task of 'committing 100 Acts of Minor Dissent' in a year. For his 26th act, he is organising a free LGBT comedy gig outside the Consulate General of the Russian Federation in Edinburgh.

The gig is in response to Russia's new anti-gay rights laws which are currently generating headlines (the most recent related story being that Stephen Fry has met David Cameron to discuss the issue).

Thomas has invited some high-profile gay, lesbian and bisexual stand-up comedians to take part in the gig. Those confirmed as performing so far are Stephen K Amos, Susan Calman, Joe Lycett, Zoe Lyons, Dana Alexander and Chris Coltrane, with more top names to be announced. There will also be a guest speaker for The Equality Network

Equality Network spokesman Scott Cuthbertson says: "Every day LGBT people in Russia face rising levels of violence and discrimination as a direct result of the actions of the Russian State. LGBT people in Russia have asked the world to support them in their fight for equality and human rights for all. What Mark and other comedians are doing to draw attention to these issue is incredibly important. As the Edinburgh Festivals celebrate the widest range of cultural and social diversity during the largest show on earth what better way than to use this opportunity to draw attention to that fight."

Mark Thomas says: "It is a pleasure and privilege to host this LGBT rights street gig. It is important that in the festival we don't lose sight of the daily struggles for equality and dignity. We stand with LGBT activists and human rights advocates against Russia's state sponsored homophobia. It will also be a hoot, so come along."

The event takes place on Thursday 22nd August between 2:30pm and 3:30pm. The Consulate General Of The Russian Federation is located at 8 Melville Street (EH3 7HF).