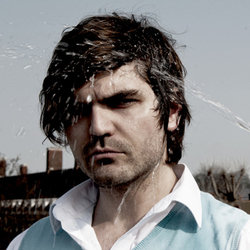 Vigorous sort-of-stand-up from co-founder and host of The Alternative Comedy Memorial Society, half of sketch group The Behemoth, writer for Radio 4's The News Quiz and star of 2010 hit Distracts You From a Murder. '...unique, highly accomplished debut hour from a talent to watch' **** (Time Out). 'Fantastically ornate but deeply silly brand of comedy, dripping with absurd puns and utterly unexpected left turns' (Guardian). 'Brilliant solo debut' (Independent). 'John-Luke Roberts. Funny as f*ck and clever? Sure. But he is also a dick. I'd bottle him all up' (Tony Law).

"A comic who's prepared to push both himself and his audience in the pursuit of new laughs, of unorthodox, never-been-tried-before routes to the funny" - The Guardian

John-Luke Roberts is the co-founder and co-host of the Alternative Comedy Memorial Society ("Joyous future-of-comedy stuff" - Sunday Times), a raucous comedy night which places experimentation and noble failure above all else, which was nominated for a Chortle Award for Innovation. He wrote The Alternative Comedy Memorial Society presents A Board Meeting for Channel 4 Blaps, which will be released later this year.

He is a writer for Radio 4's The News Quiz, and plays Computer on Welcome to Our Village, Please Invade Carefully which has just been commissioned for a second series on Radio 4. He has appeared on BBC2, BBC3 and E4, and his sketch for BBC Online Extreme Amazing Super Chess has been viewed more than half a million times on YouTube.

At the Fringe, John-Luke has appeared as half of absurdist sketch group The Behemoth (**** The List), and last year directed the Edinburgh Comedy Newcomer nominated show Discover Ben Target. This year, he also appears in one man play Sock Puppet, (2.10pm Pleasance Courtyard) and co-hosts The Alternative Comedy Memorial Society (11.30pm Stand 1, Tues, Weds and Thurs)

"John-Luke Roberts. Funny as fuck and clever? Sure. But he is also a dick. I'd bottle him all up." - Tony Law