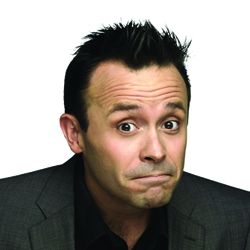 Nominated for Best New Show at 2013 Dave's Leicester Comedy Festival. Geoff Norcott is the antidote to atheist, leftie comedians. Sometimes a stand-up hits a point where he has to stop tickling tummies and say what he really thinks. This is that point. He's brought lots of laughs too - and really is quite a nice chap. 'Comedian with a big future' **** (Mirror). 'Genuine iconoclast ... more importantly, makes it funny' (Chortle.co.uk). 'Near Master of anecdotal story telling' **** (EdFestMag.co.uk). Written for Live at the Apollo and Stand Up For The Week.