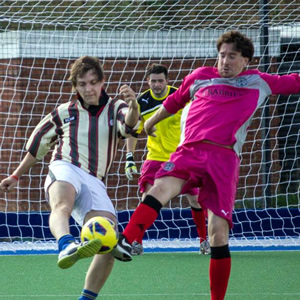 A charity football match between PBH Free Fringe performers and a mixture of comedians from other comedy shows at the festival has taken place at Edinburgh's Peffermill Playing Fields. The 9-goal "thriller in Peffermill-er" saw the Rest Of The Fest team triumph in a game that had everything: goals, incident and pink football kits.

Teams were lined up in the classic 3-3-1, with "frightening and no-nonsense" referee Lisa Fergie of the Scottish FA keeping the teams not only in check, but constantly scared.

It was goalkeeper Stuart Laws who kept the PBH Free Fringers in it with a series of scintillating saves but eventually it was Joe Davies' Rest Of The Fest team who broke the deadlock in the first half. The floodgates seemed to metaphorically open with a second goal, but PBH captain Max Dickins was reportedly "all 'nuh-uh!'" with a strike that took the game into a half time involving everyone feeling exhausted and a little bit sick.

The second half saw each side score a goal a-piece. A nasty injury forced Nathan Cassidy out of the game, "something not even a kissy wissy could make better." Luckily, Joshua Ross finally got out of bed to turn up to save the day, "like a terrible Batman", and took his place on the field. At 3-2, Bob Fletcher leveled proceedings when he chased down a loose ball and the resultant scuffed effort crossed the goal-line thanks to a comedy deflection.

The sides seemed evenly matched with the Rest Of The Fest's slick-passing triumvirate of Bor, Page and Holgate being stifled by the tireless endeavor of the PBH-ers. Each team scored again making it 4-4 with a penalty shoot-out seeming certain. However, a late strike in injury time broke PBH hearts making the final score 5-4. All that was left was for referee Lisa Fergie to present the winners with the coveted trophy and the Rest Of The Fest comics to celebrate by dancing and pouring foaming discount energy drinks on each other. 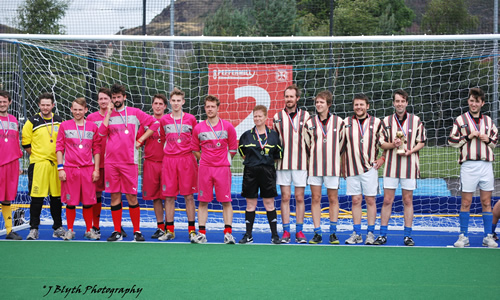 The organisers would like to thank TheBigTrophyShop.co.uk, Peffermill Playing Fields, Kits4Causes, Hibernian F.C and photographers Patry San Andres and KBPhotography.