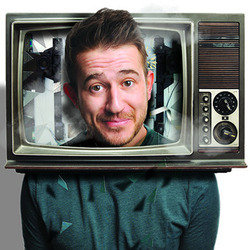 Hotly anticipated debut solo stand up show from 'one of the best upcoming Scottish Comedians' (List). His observational material 'hits the nail on the head' (Herald), with 'an incredulous eye for the ridiculous' (Scotsman). Talent scouted and signed last year by Universal for DVD development, Davey is increasingly in demand and very much one to watch. He has recently tour supporting Jenny Éclair, Daniel Sloss and Russell Kane. 'One of the best new acts I have seen! A definite star of the future! Wonderful!' (Susan Calman).

The hotly anticipated debut solo stand up show from "one of the best upcoming Scottish comedians" (The List). This fast rising star has captured the attention of talent scouts at Universal who signed him late 2012 for a DVD development deal.

Very much one to watch and increasingly in demand with his observational material.

Davey Connor is based in Glasgow and works throughout the UK. Recently he has performed to larger audiences whilst out on tour supporting the likes of Jenny Éclair, Daniel Sloss and Russell Kane.

Previous Edinburgh Festival appearances include a storming stand-up run as part of The Comedy Zone (2010) and as a sketch artist in the Scottish sketch group The Stockholm Syndrome (2010). In 2011 Davey returned to the Festival in another new, highly acclaimed sketch troupe, Alchemy devised by Brown Eyed Boy production company to give a platform to talented new Scottish comedians, writers and sketch artists. Last year Davey performed in a triple header stand-up show The Big Comedy Showcase at the Gilded Balloon.