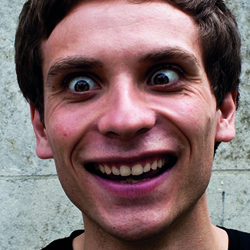 Norwegian comic and Foster's Edinburgh Comedy Award Best Newcomer 2012 presents a brand new show. 'You knew he was funny before he even opened his mouth' (Scotsman). 'A talent to keep an eye on' (Time Out).

Daniel made his comedy debut in the UK in 2007 after a chance meeting with Stewart Lee at a comedy club in Paris, and a year later he reached the final of the Laughing Horse New Act of the Year competition. However, his big breakthrough came later that year when he won the prestigious So You Think You're Funny? title, following in the footsteps of other winners including Tommy Tiernan, Dylan Moran and Peter Kay.

He took his debut show, Champions, to the Edinburgh Fringe last year, and he duly secured the Edinburgh Comedy Award for Best Newcomer - one of the most coveted accolades in comedy. He was also nominated as Breakthrough Act in the Chortle Awards 2013 and Best Newcomer in the Loaded Laftas 2013.

Daniel's appearance on Russell Howard's Good News (BBC Three) has gone viral, racking up half a million views on YouTube, and he will play a lead role in Vic Reeves and Bob Mortimer's Vic and Bob's House of Fools, to hit TV screens in 2014. He is also developing a Comedy Blap with Channel 4.