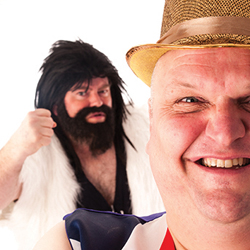 At 4.00pm every Saturday, from 1976 to 1988, tens of millions of Britons, and countless more world-wide, were in the grip of an extraordinary sports phenomenon: watching two fat men (a.k.a. Shirley Crabtree and Martin Ruane) pretend to fight each other.

This is their story.

This new play, by the award-winning writers of New Perspectives' hit Those Magnificent Men, brings back to grunting, grappling life these two well-loved wrestling rivals and the bizarre world they bestrode. With an "all-star cast of thousands" including Paul McCartney, Chris Tarrant, Frank Sinatra, Princess Margaret, and Greg Dyke, this ambitious, touching, hilarious two-hander conjures up a whole nation during its most colourful era.

Featuring Latest-7-Award and Herald-Angel winner Ross Gurney-Randall (Follow Me and Goerring's Defence - Guy Masterson Productions) and Radio 4's Count Arthur Strong's Radio Show regular David Mounfield, Big Daddy Vs. Giant Haystacks promises to be the bout of the century and a comedy drama not to be missed.

You shall be moved.