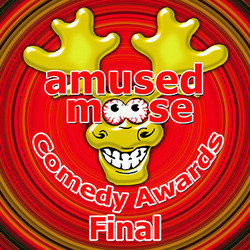 Grab your hot tickets to vote in this prestigious final alongside international comedy cognoscenti for breakthrough stars of tomorrow, with award-winning headliner and Marcel Lucont hosting. 2013's Top Ten Fringe comedy shows progress to the final after expert talent scouts view - live and online in the UK and abroad - hundreds of Fringe shows by unsigned performers, who are almost DVD-ready. The contenders eagerly battle it out for fame, fortune (£5000) and a shiny Moose trophy, emulating Tony Law and Marcel Lucont. 'Bravo' (Chortle.co.uk). 'Splendid' (One4review.wordpress.com). 'Not worth missing by any true comedy fan' (BroadwayBaby.com). www.amusedmoose.com/awards

One of the most exciting and unique composite Fringe shows comes to City Edinburgh Nightclub for one show only! Featuring show segments from the Fringe's "Top Ten" comedy shows, selected from hundreds of entries to Amused Moose Laughter Awards by our esteemed industry judges - who view them online in the UK and abroad, then live. So grab your hot tickets, talent spot and vote in this prestigious final alongside international comedy cognoscenti for breakthrough stars of tomorrow who are almost DVD-ready but have no DVD deal/support. The contenders eagerly battle it out for fame, fortune (£5000) and a shiny Moose trophy. 2011 and 2012 winners were Tony Law and Marcel Lucont, who hosts the event. The 'Top Ten' will be announced on http://www.amusedmoose.com/awards on 13th August.

Luke Toulson: I don't know how I feel about my kids

Martin Mor: How Do You Like Your Blue-eyed Boy Mister Death?

Jonny & the Baptists: Bigger Than Judas