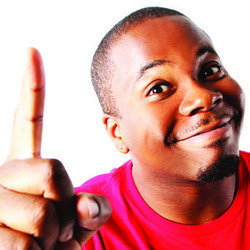 An anticipated debut show from one of comedy's rising stars and winner of FHM Stand Up Hero. 'Bursts onto the stage like a breath of fresh air' (Chortle.co.uk). 'Charming Observationalist' (Time Out). **** (ThreeWeeks).

This debut show from one of comedy's fastest rising stars will see Davis skilfully take audiences on a journey around familiar places we can all relate to such as the workplace, visits to the doctors and parenthood - all delivered with his impish charm.

Davis is quickly climbing the comedy ladder and becoming regarded as one of the hottest new names on the circuit. His refreshing observations have seen Marlon named as FHM Stand-Up Hero 2009 winner, Channel 5's So You Think You're Funny? 2006 finalist, Laughing Horse 2006 finalist and Amused Moose Laugh Off 2006 semi-finalist.

Alongside his stand-up talents, this bright young comedian is also a respected actor and writer. With a Brown Eyed Boy series on MTV under his belt he also featured in and wrote for the shorts series The Secret Life Of Hoodies (Paramount).