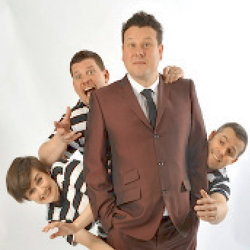 Oooohh, a sketch show this year from the award-winning comedian and writer of Mock the Week / Shooting Stars. Directed by Marek Larwood (We Are Klang). What to expect? Quick fire gags with a smidgen of surreal and a soupcon of brilliance. Warning: show contains Dave's bare bum. Frank Skinner described Maff as a Material Machine! 'Clearly prolific writing with skilled delivery' (Chortle.co.uk). 'Howl out loud, funny and refreshingly honest' (Metro). 'Comedy the way it should be, leaves the audience wishing the show was just a little bit longer' (EdFestMag.com).