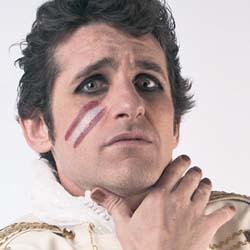 Primark and meat-van-men have more in common than you'd first imagine. Thankfully, outrageously talented Canadian export Tom Stade is more than happy to explain everything in his Edinburgh Fringe show, What Year Was That? Aided by sidekick Jimmy, Tom is putting his stoner-styled memories and observations in order - memories and observations that are insightful, original and pretty much guaranteed to make you snort beer out of your nose.

Hot on the heels of his debut nationwide tour, Tom is heading to the Fringe for the first time in three years despite the fact that he now resides in Edinburgh! His magnetic stage presence, irrepressible charm and first-class story-telling have established him as one of the most sought after performers on the UK and international circuit. His earlier visits to the Fringe - Tom Stade: And Relax (2006); Setlist (2007) and Oh Fuck, Do We Need A Title, Too? (2008) - have been greeted with great acclaim and boosted Tom's reputation as a natural stand-up and one of the best we've got.

Tom's television career began with a one-hour special, Stade And Confused, in his home country and he's made waves over here as co-star and co-writer of Frankie Boyle's Tramadol Nights (Channel 4), and with appearances on Michael McIntyre's Comedy Roadshow (BBC1), Stand Up For The Week (Channel 4), BBC3's Edinburgh Comedy Fest Live, and Dave's One Night Stand.

He has headlined everywhere from New York to Johannesburg; he's performed at comedy festivals around the world and entertained the troops in Afghanistan, Iraq and the Falklands. Hotly tipped as the next big comedy name, Tom offers a trip to his inimitable, offbeat world for a truly unforgettable hour of gags, anecdotes and spot-on observations from one of the finest stand-ups around.