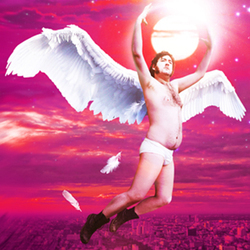 Multi award-losing comedian and professional dick-kicker Nick Helm will sweat in a portacabin for an hour as he stamps out broken dreams and crushed hopes and dares you to Dare to Dream. Comedy, poetry, music, volume. Book early. As seen on Russell Howard's Good News on BBC Three. Chortle Best Breakthrough Act 2011 nominee. Leicester Comedy Festival Best Show 2011 nominee. 'Thrilling' (Times). 'Nonsensical joy' (Time Out). 'Nick Helm will be the breakout act of this Fringe - or at least he ought to be if there's any justice ... It's a real blast' **** (Chortle).