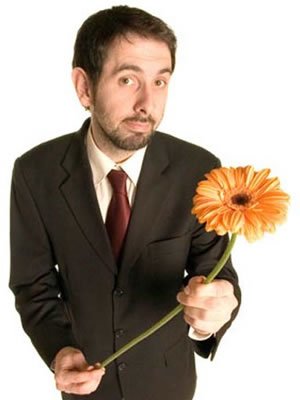 Steve Hall's Very Still Life focuses on a stressful year. Steve, one third of We Are Klang, talks to Lucy Wood about this year's Edinburgh show...

Tell us about Very Still Life...

The show is about my attempts to be less of a miserable stagnant human, with a background theme of the wife's visa troubles; she wasn't allowed into the country for most of the first year of our marriage. But it's a happy show!

It's the first time I've done Edinburgh since 2008. I'd wanted to do a show last year but the financial ruination we experienced with the visa stuff put paid to that. It's got lots of jokes in it.

I think not having done Edinburgh for a while may mean I do averagely ticket wise. It's enough time since Klang went out and so on. I am hoping that people who saw me support Russell Howard might come too.

What does your wife think of the show? Does she mind being in your material?

She doesn't mind being in the material and, in fact, she's a very effective co-writer. I never name her specifically - she's a psychologist so we want to make sure her name isn't bandied about too carelessly. So she is always just identified as 'my wife', a 'her indoors' for those worried about patient confidentiality.

It's a very personal subject matter. Is it odd talking about your life so intimately in front of strangers?

I've always had a massively heightened confessional drive, so it sometimes doesn't even occur to me that it might be too much sharing. The truth is more interesting, trying to give people a sense of who you are, especially with an Edinburgh show.

The issue surrounding getting my wife into the country was a dominant factor in my life in the past two years, so it's inevitable that it'd become part of the show.

How do you go from thinking 'that's a good idea' to writing it as material? What's the process?

The Fortnight Club new material night has been a massive help with this. It's one of the first clubs I ever went to, and it was there I first saw Logan Murray, who directed all of Klang's shows. He would regularly host as his Ronnie Rigsby character, and when I was at uni we'd go along and see Rob Newman, Lee Hurst and so on trying their new gear.

It's an enjoyable place to trial stuff. I find I need to empty my head; just get everything out and then sift through what's coherent. It's often messy.

So how long does it take to prepare? 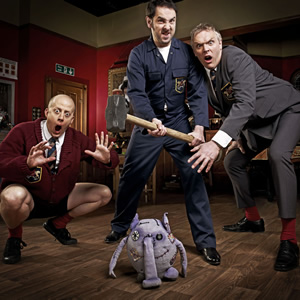 You've always done solo stuff alongside Klang; is it easier when you're not working alone? I guess at least there are others to blame!

It's a bit of both - one of the best things with sketches is getting to nip offstage to do costume changes etc, which in the sweaty hypocausts that are Edinburgh rooms is a sweet relief, getting to take a breather.

There's obviously a camaraderie and gang mentality which is fun when doing sketches, but obviously the need to compromise can create frustrations, or water down the finished product. But when it works, it the results can be exhilarating.

And your stand-up, I would say, is very different to the group stuff. Is it nice being able to swap between the two?

Very much so. The first comedy I listened to addictively was the radio series of The Mary Whitehouse Experience, especially series 3 and 4. And the brilliance of those shows is often unjustly forgotten.

The mix of stand-up, sketches and just incredible ensemble titting about was amazing and inspiring. A lot of my favourite comics had many strings to their bow, so it always seemed a natural thing to do - seeing Sadowitz do Bib and Bob with Logan, having already been a fan of his solo stuff, was mind-blowing.

Are people who know you simply for Klang surprised at your solo material?

There's still some of the Klang dickishness to my stuff. I just use a clumsy verbosity to appear more clever than I actually am. There quite a few lines I'd developed in my stand-up that ended up being used for Klang, and some rejected Klang lines that I've co-opted into my solo act.

Do you ever sit back and think 'I can't believe I'm doing this for a living'?

I worked in a call centre for NatWest for four years, thinking I'd wasted opportunities people way more deserving than I would have killed for, so every day I give thanks and am deeply relieved. I was once bollocked at work for logging in on my phone 20 seconds late.

What would you have done had you not gone into comedy?

My mate Saliya did some stand-up gigs with me when I first started, and an ex-girlfriend of mine asked him why he was doing it saying "I know why Steve does it, he's got nothing else." So I genuinely don't know where I might have ended up. Sometimes I wonder if I subconsciously shafted my career opportunities to force myself to give comedy a shot.

How are you finding the festival so far? And how do you survive it?

I'm several shows in at the time of writing, and it's the usual mixture of depressing, humbling, exciting and thrilling. It's interesting to see how numbers across the board will pan out in these economically troubled times, and on a personal level having not done anything at the Fringe since 2008.

I honestly don't think of it as something to 'survive' - it's a great thing to be part of. Though Berocca helps. And not being self-deluded.

What's next after Scotland?

I can focus only on Jeff Mangum's ATP in December.

And go on, tell us your favourite joke.

Favourite joke that isn't mine: Why shouldn't you wear Russian underpants? Because Chernobyl Fallout.

Favourite joke that is mine, but not in this show: I despise cliqueyness for reasons only my four closest friends will ever properly understand.

Steve Hall's Very Still Life is on at the Pleasance Courtyard at 20.30. Listing