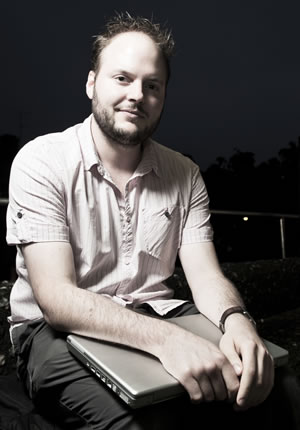 Ben Walker, the producer of the As It Occurs To Me and Pappy's Flatshare Slamdown podcasts, once described by Andrew Collins as "the Ari Gold of podcasting", tells us about new comedy quiz podcast Do The Right Thing, which is launching this weekend at the Fringe...

Hi Ben. Tell us about the new podcast...

Gladly. Do The Right Thing is a comedy quiz where two teams work out the right thing to do in various weird and wonderful situations: how to survive a wolf attack, the correct way to tend for an injured bird, there's a round where they act as agony aunts to the audience, that sort of thing. It is hosted by Danielle Ward with team captains Michael Legge and Margaret Cabourn-Smith and for these two Edinburgh gigs we've got great guest panellists in Al Murray, Shappi Khorsandi, Scott Capurro and David Reed.

Your last podcast project - Pappy's Flatshare Slamdown - was also a panel game, are there any similarities?

Well both shows are born out of the idea that to make a comedy podcast work you can't rely on lots of people doing lots of preparation. So the rounds in both are devised so that the guests can just turn up, join in and be funny. Also, both shows use the same bells and squeaky toys as 'buzzers'.

Otherwise they're pretty different beasts. Flatshare Slamdown was based on Pappy's style and dymanic - rounds like Beef Brothers, Flat Olympics and quizzes on Rubbish Bin capacity could only really work in the world we created around them living together as flatmates. Do The Right Thing is a much simpler premise with a core theme (working out the right thing to do) and as such is more like traditional comedy panel games like QI or Would I Lie To You (though admittedly with more stupidity, swearing and shouting).

This is the third podcast project you're producing. What's the attraction?

I just love the immediacy of it. When Richard Herring got me involved in As It Occurs To Me I was really inspired by his whole ethos of doing it yourself, getting it out there and trusting that making something you find funny and fun to do will find an audience. The panel game podcasts are (for me) a lot more work to put together but the results and the response make it worthwhile. Plus I'm getting to work with some very funny people.

Do The Right Thing is being recorded this Saturday and Sunday at 12:30am (late night) at the Pleasance Dome. Saturday tickets | Sunday tickets, with further dates in London after. You can hear the pilot episode here